A Reluctant Guide to Camping

Camping sucks. Why does anyone do it! Every year, we are all asked to go camping as though our personalities have changed to loving the outdoors suddenly. And no matter how much you are sure you hate camping and don’t want to do it, eventually you break down and say okay, in case THIS time it will be fun for the first time ever. 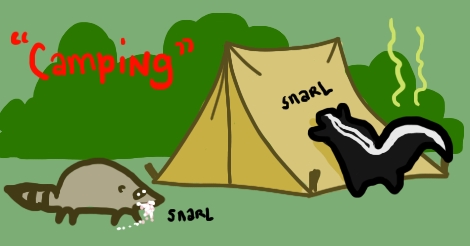 And it is fun — in theory. However, when you get there it is full of bugs and people want you to do things with them and also there’s no shower. The rest is fun though! The sleeping and eating and some of the seeing your friends is fun. Maybe hiking is part of camping, and that’s fun, but really hiking is its own thing, so whatever. Anyway here’s the foolproof Sneer guide to trying your best not to want to die while being forced to camp.

Bring at least one tent for each person to have to themselves, for privacy. It’s like you’re alone! That way you don’t have to worry about when your pals go to sleep, if someone moves around in the giant inflatable bed you also brought, or if you have differing opinions about when your shoes come off in the entrance process.

Actual Tip: Bring an extra tent of any size if you can, or a canopy, for somewhere to gather and hang out in case of inclement weather without bothering everyone’s stuff. It is almost 100% guaranteed that if you consent to go camping, there WILL be a storm, or at the very least, a terrible downpour. You don’t want to experience being trapped in a small tent with anyone while the rain seems to never ever end.

Immediately build a campfire for warmth, entertainment, and food. Never let that fire go out and never put it out. It is the source of the delightful magic that will make your camping trip into something that resembles fun, through its ability to heat your food and your bodies, and to pull people closer at night, as if you guys like each other. If everyone wants to leave the campsite, someone should stay behind and tend the fire. Definitely do not leave it alone, because you probably shouldn’t have the fire roaring the whole time anyway. Be safe and sensible and make Smoky the Bear proud of you!

Actual Tip: Get lots of wood right away so you don’t have to worry about searching for more at night, or alone. There are wild animals and monsters out there in a darkened forest, and you don’t want to have to be brave while collecting dead branches in the inevitable rain. 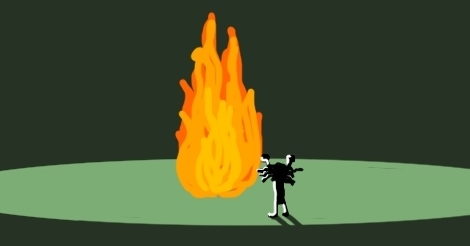 Going to the bathroom is a nightmare. Men, you have it easier, but just a little. Dropping your pants and possibly squatting to relieve yourself is a terrible prospect. Doing it in a forest over some leaves and dirt while the wild animals and monsters watch you is even worse. Always know what poison ivy looks like. Pray that you remembered toilet paper. Amandoll went outside one time in 2007 and she will never be over the trauma and also will never feel clean again. She still gets angry when she mentions it.

Actual Tip: Practice squatting in advance. Build up those important muscles! Also bring baby wipes and/or feminine wipes with you! Really, do not forget those.

Stay away from people or you’ll hear laughing children and/or arguing couples during your trip, or, even worse, all night. Somehow, even though you are supposed to be “roughing it” in the so-called great outdoors, there are always so many people around! You’re not camping, you’re living in a little shanty town in a state park! When you reserve the campgrounds, if that’s an option, check where the most isolated spot is. You’ll need lots of space for the excessive drinking and all the drugs you’ll probably be doing in order to survive this experience.

Actual Tip: Note where the sun will rise, and get shade in that direction, or you’ll wake up in a puddle of summertime sweat.

Animals are great and wild animals are wonderful, but they are also terrifying. Too many people don’t treat them with the respect that they should and so what can happen is that they frequent campsites and ruin everything. No matter where you are, the raccoons will maraud. Fully anticipate setbacks caused by all kinds of cute, fuzzy, completely feral creatures.

Actual Tip: If you are staying anywhere that there are bears, then you had better read and follow every survival guide you can. Hide your food, carry bear mace, and live in fear because no one wants to wake up to the sounds of a snuffling bear on the other side of thin nylon. And if you do wake up hearing that, then I guess die on the spot because that’s what I would do. 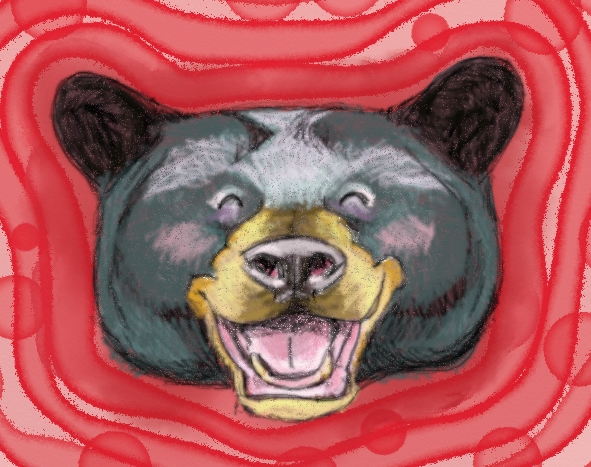