Back in MY Day: Humble Halloween Costumes of the 80’s and 90’s

Quality-wise costumes are one of the things that Present Day Halloween has over the days we old-timers enjoyed in the Eighties and Nineties. Masks are reaching very realistic levels, and are no longer those plastic faces with the string that cuts into the back of your head and causes your ears to hurt the entire night. Full outfits consist of just what it sounds like: a full, detailed outfit, not the mask spoken of above and a smock which, instead of having a body, just had the logo of whatever you were wearing. 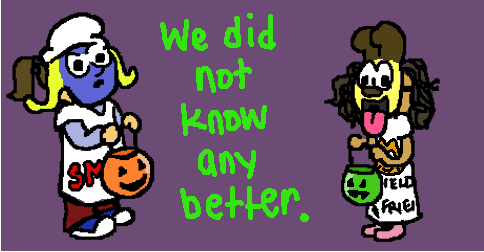 Costumes these days even incorporate a lot of special effects. I recall one costume I wore, a costume from the film Terminator 2. I was ten, I knew my days as a trick-or-treater were numbered, and I wanted one of my last couple of Halloweens to go out big. The kit consisted of a gray “metallic” half-face mask, fake skin to wedge around the mask, and an actual red light in the eye of the mask.

I applied the fake skin (which I had a small allergic reaction to), fitted the half-mask, and switched on the red light…I was Death, a death machine from the future who was fueled by the desire to make my frame even more repulsive by gaining even more weight from sweets. For the record, the red light worked via a wire running from the mask to a small control box (it was the early 90’s so small means roughly the size of a brick) with a switch. So there you were, approaching the porch of an old lady with bowel-problems that were the stuff of legend…looking to scare her into a brown mess with your glowing eye that Oh Sweet Jesus could not possibly be human! You knock and wait, and when she opens the door you hit the switch and… fuck that switch is hard to goddamn move! You fight with it a moment… and a moment longer… and the lady on the porch fully sees what you are doing. When the switch finally gives way and the light comes on, you do not get the smell of shame and howling of a scared old broad, instead you get an, “Oh how cute, your little eye lights up!” The illusion is ruined. Welcome to costumes of the 80’s and 90’s. 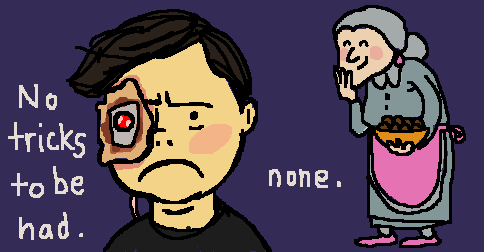 Today I imagine old folks with bowel problems don’t even leave the bedroom. With all of the full realistic get-ups going around today, answering the door on Halloween night means going out to try on new pants the next morning. And goddamnit where were those full Freddy and Jason get-ups when I was young? I pieced together a Freddy costume with a shitty mask, foam hat, halfway look-alike sweater, and not the GOOD Freddy glove replica, but the one that was pantyhose type material with poor, poor pieces of plastic for blades.

These kids have it too easy. Full outfits of high quality are right there for the taking. There is no originality or home-made costuming done these days. I’ll probably count fifty kids wearing the same superhero costume, the exact same damn one.

Give me one budget superhero, I’m just asking for one kid who has a blanket for a cape… I’ll give him money and a hug. Then more money so he will tell his parents that the hug never happened.