When I was a younger person, in my single digits, I had some Big Ideas of how the world works. For no readily apparent reason, (because adults didn’t feed me these thoughts and I did not hold discussions on such topics with my peers), I believed all kinds of things that eventually faded – but they never went away completely. 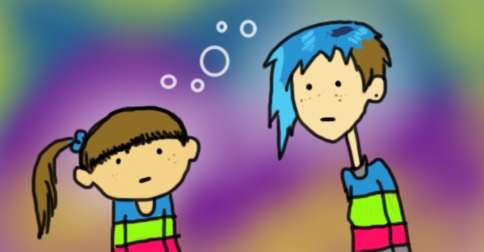 I thought that if any water was murky, that meant there were sharks right out of view, ready to eat me. I thought that if Satan was the Father of Lies, then the greatest lie would be to pass himself off as God and to get humans to worship him and commit atrocities in his assumed name. I thought spiders in webs were our ancestors, for some reason, keeping an eye on us. I thought that if you slept in a room within view of the mirror, your reflection would wake up and jealously stare at you and try to get through and replace you in this world. I thought mushrooms growing in the yard were types of cheese. And yet, I didn’t fear that stepping on sidewalk cracks would break my mother’s back. That’s just silly!

But I want to talk about the idea I held most firmly: that the world and the future had limitless possibilities for me, and for anyone. Want to be an astronaut when you grow up? Well, I thought, all you have to do is just want it. The notion of having to study or train for space missions was laughable to me, if I even considered it at all. With this belief firmly in place, what kinds of plans did I make? With the universe existing only to fulfill our any desire, which desires did I select for myself?

I had read about there being such a thing as eidetic memory, and I wanted to have one, too. I wasn’t born with this ability, so I figured that if I could just tell myself every day to “don’t forget to become photographic, Memory,” that I would just notice one afternoon that it had developed. I didn’t do any memory-strengthening activities, because I didn’t want to have to work for anything ever. By the time I developed a semblance of a work ethic, I had come to the conclusion that I was never meant to have a photographic memory and was content with just KNOWING that I was remembering something with 100% accuracy whenever I was in a fight with anyone (the only time I apparently rely on memory anymore). Otherwise, quite honestly, my memory appears to rival that of a goldfish.

My best friend since kindergarten, Carrie, has really great dimples, pretty much even when she isn’t smiling. I wanted to have dimples like that, too! Again, disregarding the idea that I needed to be born with a dimple gene, I thought that I could just press on my cheeks every single day until I MADE some dimples. I had partial success with this. Twenty years later, I noticed that I have the faintest little dents in the right places when I smile. Mostly, I have had to content myself by collecting friends who have dimples, delicious dimples.

To Take Notes By Drawing

I developed this theory while I was supposed to be taking notes in class. I thought that I could listen to the teacher lecturing and turn what they said into drawings on the page that I could look at later and translate it back into the exact words spoken at the time of drawing. They were always nonsense doodles, as seen in the following image. I thought that if I tried enough times, this would be an actual thing that could work. Yes, this was easier than just writing the words down. Of course, the result was just pages of doodling that meant nothing to me when I looked later, and occasionally getting in trouble when the teacher noticed that I wasn’t “taking notes the traditional way.” Don’t worry. I still made A’s. 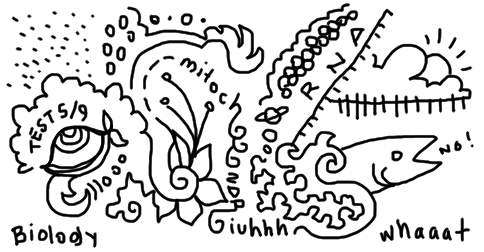 To Be So Good at Anagrams and Jumble Puzzles

I’m not sure if this was a side effect of being put in the “gifted class” during school where we had to frequently do creative puzzle games and brain twisting worksheets, but I very much wanted to be able to be shown a big pile of alphabet and INSTANTLY be able to come up with dozen-letter words, one right after the other. Like, I wanted to have idiot-savant levels of skill with this. I didn’t want this to just be a party trick, I wanted to FRIGHTEN people with how good I was at it. It never happened! However, earlier this year, I got an anagram app and saw myself make a little improvement. Most of the time I still struggle, but I’ll take what I can get.

To Be Able to Change My Appearance, Vaguely, At Will

Another theory I had when I was around ten years old was that what people actually see when they look at you is the image of yourself that you project mentally. It is the reason I didn’t like slumbering at slumber parties, while on the bus, or at any time around anyone. I didn’t like the idea that they “might see the real me.” Anyway, I felt that if you project “I am attractive,” people will come away with the sense that you are attractive. I wanted to take this further. I wanted to get to the point where I could project “I have this different nose now” and that is how people would see me. I’d look in the mirror and think different things about myself and wonder if people would ever not recognize me just because I had mastered the ability of face-change. I’m actually not sure if have achieved this. Maybe I have? Oh my god, have I? Quick, someone stare at me for a while undetected and tell me what you discover!*

*Please never do this.