We have all had our favorite food or drink items before. Something that, for whatever reason, you really take to and thoroughly enjoy above the sea of fairly similar products. As a child, you can probably recall your favorite candy. I’m sure most of you played it safe and fell in love with a candy that was a major household name, and one that you would never have to worry about not being there. Instead of going out there and taking chances, you took the easy way out. Does it make you proud? Probably not. But at least you haven’t had to deal with heartbreak due to your risk-taking. No, I am not crazy by talking about attaching yourself to a certain kind of candy and comparing it to falling in love. I HAVE loved and lost in the candy world, so I know what I am talking about. 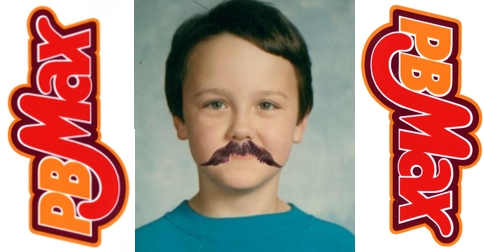 Its name was PB Max.

We were in love, goddamnit.

Taking a Look Inside

I am going to speak of something I am quite familiar with: the insides of PB. So many nights I was deep into PB, poking around at its insides with my hands and my tongue. Consuming it, enjoying it, relishing every moment as if it was our last… because I think deep down I knew this was too good to continue on forever.

PB Max was covered completely in chocolate on the outside, just like most candies at the time. This was not what made it special. Instead, we have to look deeper. We will start at the bottom with a crisp and delicious cookie. This isn’t one of those damned thin strips of graham folks try to pass off for a “cookie.” This is the real deal. If you were to strip off all the other components, you would be left with a cookie you would be proud to eat all by its lonesome. However, the best is yet to come. On top of that cookie… some oats. Not too exciting, is it? But wait, what is that pulling into harbor? It’s a damned BOATLOAD of peanut butter! What would PB Max be, after all, without more PB than you probably put on 4 sandwiches? Of course this caused a separate bit of rage, as everyone must have been a dumbass in 1990 because for the life of them they couldn’t figure out what PB stood for.

I was not quick with my words back then, but if I could go back I would tell them it stands for “Piss Bucket” and would then sling onto them the already-prepared bucket of urine I had been collecting for just that occasion.

I never had much of a sweet tooth growing up, and I still do not. For me, chocolate is something reserved for maybe once a month or so. I can only guess it was the packaging that attracted me. In that world of long, rectangular, black packaging came this large white square monstrosity. A candy that so boldly attempted to stand out deserved at least one try. So right there, in a Food Lion checkout on a particularly cold October day, my first bite was had. I got my mom to purchase three more right there on the spot.

I would go on to purchase a PB Max or two every time we went to the store, and sometimes if I was lucky the occasional gas station would have them. I didn’t want it to ever end.

I got the first hint when the Food Lion I discovered them at was no longer restocking them. Every time I went I would get one, and a week later another, and the supply was never replenished. I took to taking notes of the numbers on the packaging of the remaining packages, and sure enough the next week they were still the only ones there. I was young, but I knew that not being restocked in over a month was probably bad news for a product.

I held on for as long as I could, buying up the rest and then trying to visit all the familiar spots that once sold this treat. They were also on their last few or completely sold out with no spot on the shelf any longer. Of course I had only tried a few stores, so the telephone campaign began.

I can only imagine that the folks I called are still laughing to this day about the frantic fat child calling them and pitifully asking if they still sold PB Max. Did they take pleasure in telling me they no longer carried it? Did the one old bastard at another Food Lion take pleasure in being the one that finally told me they were discontinuing the product? I’m not sure, but I always assume the worst of people so I will say they loved it.

I was already hurting. I was a prize fighter taking left and right hands, and the only thing keeping me up were the ropes. I only had one last number, and it was for a gas station that was roughly 45 minutes away. I clutched an empty PB Max wrapper in my hand as I dialed the number. I politely asked if they still carried PB Max. The clerk replies:

I saw red. I squeezed the wrapper tight in my hand and held the phone in front of me as if I was going to consume it. 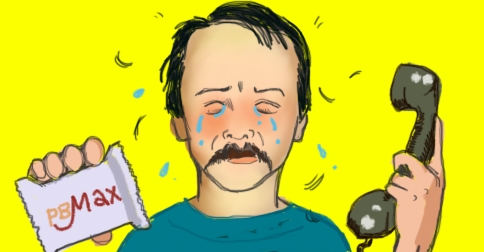 “IT STANDS FOR PEA-NUT BUT-TER” I said in a tone that contained a level of smart-assness I wouldn’t go on to master for several more years. The young clerk stammered and hung up, and I bid him good riddance with a slamming of the telephone that probably caused the crack that ran from right below the cradle of the phone all the way to the bottom. I would successfully pin this blame on my cousin a few days later.

Heartbroken, I finished the last few PB Max candies I had. I still own the wrapper from the very last one. Old folks say that old snow stays on the ground because it is waiting for more, and so does this PB Max wrapper. It sits patiently in either a drawer or one of two boxes I have it narrowed down to, waiting for more of its kind. What a day that will be.