Death and How to Die It

As funny as death is, it also has a serious side. It isn’t ONLY fun and games; you owe it to yourself and others to plan for it and treat it as the solemn event that it deserves. I can think of nothing worse than to find out that you do leave a ghost, and that ghost is embarrassed by a lackluster death and shortly-after events. Eternal damnation has many faces. 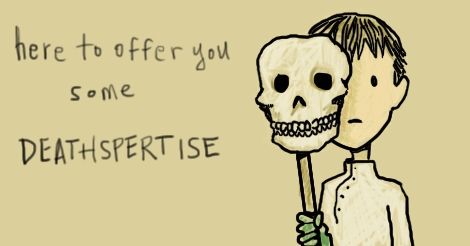 As that murderous Dorothy said in The Wizard of Oz, “there’s no place like home.” You’ll be spending quite a while in your new home, so you should make it a special place. Most interior decorators, with the exception of Martha Stewart, will tell you not to go with the “Unpitying Warlord motif,” but I disagree. Nothing says “get out, bitch” like two thousand human skulls adorning the walls of your crypt. Don’t have two thousand enemies? That’s okay.

Try one or more of the following to quickly gather some nemeses:

Now that you’re more despised than Nixon, you simply have to mass kill your enemies and find a way to staple them inside your awesome deathhouse! A simple task, really. Remember: no one can resist Kool-Aid. 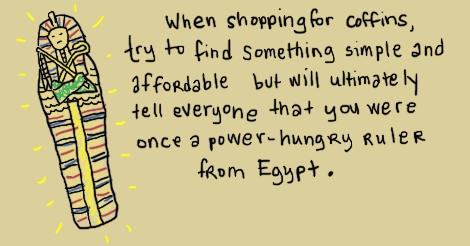 All that Mausoleum-building will leave you broke in the bank vault. Now you will need some way to support your loved ones when you’re gone. So, if you’re one of those people who “cares” about this kind of thing, I’ll let you in on a little secret:

PRO-TIP: Here’s a fun and easy way to make money. You’ll need a gun and a bullet. Take the bullet and insert it into the chamber. Spin the chamber. Find someone who enjoys gambling and/or death. Bet that you won’t get shot. ©Russia, 1908-2002

I swear, the money just pours in.

Of course, if you’re concerned about things like “legality” and “not having your bullet riddled-body found and abused by a hobo” you could just get standard life insurance. It’s essentially the same as the previous method, only your return isn’t as big. You also have to talk with salesmen who have the personalities of cardboard. This is almost as bad as a bullet to the head.

No, not space. I’m still talkin’ ’bout death. Although that’s not to say they can’t be combined in some fantastic way. As that song by Swedish pop sensation A-ha goes, “living’s in the way we die.” Finding a creative way to die in this competitive society is the most essential part of your death. So if you want to be remembered past the two hours it takes for some drunk guy to shovel dirt on top of you, ask yourself the following questions:

These questions and many more will help you shape your ideal exit from this world. Don’t be afraid to inconvenience others during your departure. Skyscrapers and train tracks aren’t just for decoration, you know.

Now if you’ll excuse me, I have to go make some Kool-Aid. 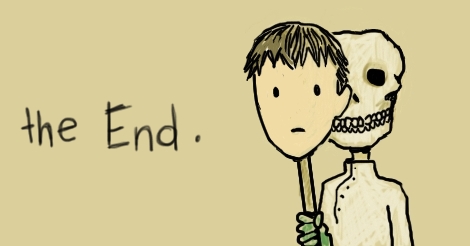