The setup is common enough. Three adult children and their parents, along with some little ones, navigate the strange world of having all your family nearby. However, if you distill any sitcom to its most basic premise, they’d all be described as “Friends or family living or working together or near each other” imo. Of course, however, the differences are what make these shows worth watching!

This one is the not-so-new show Life in Pieces, from CBS (but more importantly Season 1 is on Netflix). And if you love it, you’re in luck! Season 2 is almost finished airing. But, since I’m loyal to my boo, Netflix, I’ve only seen Season 1, which I’ll talk about. Strangely, I can’t seem to find any positive reviews, so please take my word for it. 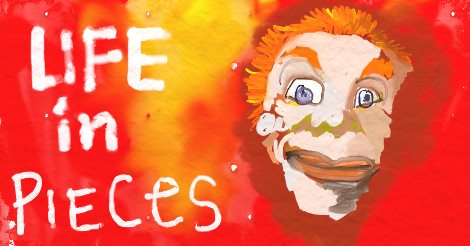 Each of the 22 episodes are presented in 4 parts, reflected in the episode titles, which at first might appear to be four words at random. The bad reviews seem to insist that this white family of miserable assholes is boring. So this show of family living near each other and having wacky adventures, of course seems boring on the surface. But it’s funny, kind of witty, the perfect amount of weird (not too weird), and the tiniest bit cute.

Joan and John Short are at the top of this show’s family tree. The grandfather John, played by James Brolin, is a sweetie. He’s gentle and simple and tries to make people happy. That’s pretty much it! He has some wacky ideas about how to do that, but he sure means well. His wife, played by the adorable Dianne Wiest and who the younger kids refer to as Mom-Mom, is a kind but astute woman.

Matt, Greg and Heather are the next generation in this family. Matt still lives at home, but he’s working on it okay! At the start of the show, he meets his new gal, Colleen. Colleen, however, still lives with her ex-fiancee Chad, played by Jordan Peele who never ever disappoints. Matt is a beloved Uncle to his sister Heather’s three children, especially the oldest, a boy in the ravages of teenagehood eager to take any advice or fist bump that his Cool Uncle throws his way.

Greg and Jen, played by Colin Hanks and Zoe Lister-Jones, are the best couple in the show. They just had a daughter, Lark, and they’re trying to navigate new parenthood with the added obstacle of being a sort of odd couple. Greg is a little awkward and Jen clearly runs the show. She’s never without the perfect hilariously snide remark.

Heather is married to Tim. He’s kind of a buffoon, but stupid dads are in vogue these days! They’ve got three children, who are described in the show as “jackals.” Heather worries too much and Tim relaxes too much, but they get by.

The youngest daughter Sophia is something you see all the time nowadays. A sassy youngest sibling who seems just a little too adult. No worries there though as she does plenty of childish things. The middle child Samantha is sarcastic and a superb eye-roller. Tyler’s off to college soon and has a chesty girlfriend that he’s insecure about.

Oh yeah you are probably wondering what’s up with that frightening doll at the beginning. Well, he’s a later addition to the show, but really shines in his role. To find out more about Cheeto, you’ll have to watch for yourself, but he’s worth it.

They all are, really.