Gift Cards as Gifts: An Opinion 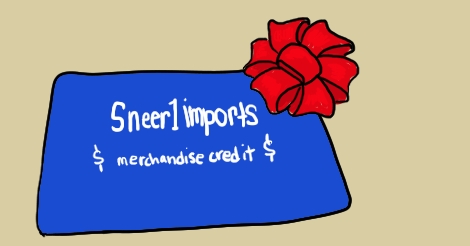 There are some who say that gift-giving is a dying art. There was a time once when gift selection was a thoughtful process of deciding upon a gift that reflects both the giver and its recipient, when the giver sought something that the recipient would want but would be unlikely to buy himself.

There was also a time when we lived in caves and drew stick figures on the walls.

Yes, now we live in what historians will one day call Modern Times, what with the cable TV and the “World Wide Internet” and the spray cheese and the downsizing and the Taco Bell and the one hit wonder and the female impersonators and the Lincoln Town Cars and the Wal-Marts and the African skin cults and the Bimini Road and the wild packs of Mole People from Far Ends of Time now roaming the earth. We don’t have time to give that much thought to others; we have a hair appointment at four o’clock!

And retailers have noticed this. They have responded to your unspoken and largely subconscious demand, and staffed their stored with courteous, knowledgeable personnel who can help you find the perfect gift just by asking you a few simple questions. To find them, one must only wander through the Small Appliance section until you find the entrance to the Maze of Despair behind a Black & Decker toaster oven, then defeat the savage Minotaur and the fearsome Gorgon. After that, you must only ascend the Cliffs of Eternal Perilous Peril and then describe to the crazed, unwashed hermit living in a cave at the summit (note: not me) the sound of one hand clapping using NO ADVERBS.

However, after several customers were petrified or lost forever in the Mists of Confusion, retailers came up with a second plan: Gift Cards. Gift cards are like gifts except without the thoughtfulness of a gift or the freedom of actual cash. The way they work is you go and plunk down twenty dollars, plus tax, for a card that’s worth twenty dollars. Then the recipient has this card that’s only good in ONE STORE where he can go and pick out his own damn gift.

I’m sure you can see the brilliance of this. The giver gets a quick and easy way to generate the illusion of thought and care. The retailer gets money for essentially nothing. And the recipient gets something that’s almost as good as a wad of cash, except that while cash can pay bills or go into your savings or be used anywhere you want or even stuffed into your mattress for twenty years, a gift card can be used to buy anything at Wal-Mart, so long as you redeem it before its expiration date. Plus, the recipient gets to know precisely what the giver thinks he’s worth! This is a good strategy for retaliation gifts, which is when a person feels obligated to buy a gift for someone because that person bought a gift for him. “Here, spend this much money on me,” says the gift card. 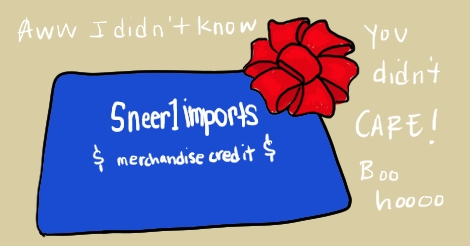 This phenomenon has become so popular that even restaurants are getting in on the act. I’ve seen such eateries as Texas Roadhouse, O’ Charley’s, Quizno’s(?), Subway(!), and McDonald’s(!!) offering gift cards and certificates. “I decided that Target might have something you could actually keep, so instead I bought you a certificate for ten bucks’ worth of Big Macs. Also, here’s a coupon good for three dollars off an angioplasty!”

Gift-givers, if someone asks specifically for a gift card, fine. Get them one for a free CAT scan to find out what is wrong with their brain. And if you don’t want to hunt someone down a gift because he’s one of those idiots who just say things like, “Oh, anything will be fine” when you ask him what he wants for Christmas (Moms are notorious for this), fine. Give ’em cash. But for the sake of all that is reasonable in our society, don’t trade perfectly good money for a card or certificate good only at one place. It is stupid.

I’d rant more, but I have to try to find something I’d want at “Bath and Body Works.”