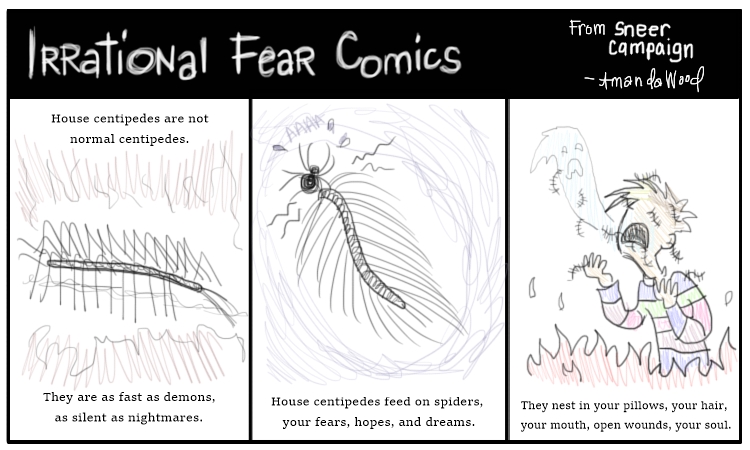 It makes sense to be afraid of a centipede because they have the ability to deliver a nasty little bite. Some of them do, anyway. So you should approach them with some amount of care. I actually don’t mind most centipedes. I don’t really want them to be on me, or anything, but compared to this one specific type of incredibly common centipede, the House Centipede, I am practically long time best buds with every other centipede on earth, including those ones that are so big that they can eat mice.

The house centipede is frequently found inside of, you guessed it, a house. They are actually good critters because they hunt spiders and crickets and roaches, but unfortunately their appearance is so terrifying that I would rather live with spiders — and spiders almost terrify me into paralysis, too. But it is nothing like when I see a house centipede!

They have horrifically long legs which are also psychic antennae. I know that their legs are some sort of unholy feelers because if one is walking on a wall and I see it from far across the room, the moment my eyesight lands upon it, it stops. It FEELS my vision. It probably then feeds on my terror, or hones in on my fear so that it can make its way to nest within me when I am sleeping. I am marked when this happens, just like any of you! Have you seen how fast they are?? It is unnatural! Nothing on this earth should ever be even half as scary as these house centipedes are! However, I get the feeling that this fear of mine is “”irrational”” because everyone always tells me to calm down whenever I fly into a panicked outrage as I talk about them. Also, everyone else I know is able to kill them in cold blood, or even trap and release them. I never can. If I can make myself move at all it is in the opposite direction, out of the room, forever.