Journey to the Bottom of the Earth

Somewhat recently, fellow resident of the Sneer House, Lisa, and I took a trip to the Midwestern United States’ Largest Flea Market, which is conveniently located just north of Cincinnati. For those of you unfamiliar with the large scale flea market, let me just describe it as an expansive building filled with booths that are full of an array of garbage that is for sale. Some of the booths actually sell quality items, and you wonder what they are doing there, but mostly it seems to be junk that fell off of the back of a truck and these people scavenged it and put low, low price tags on it — or absurdly high price tags. For those of you who ARE familiar with flea markets, you know that the “bottom” in my title means a butt. 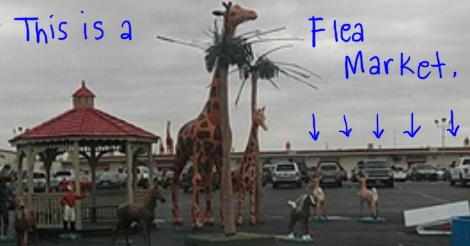 Most of my consumer joy involving rummaging through mountains of detritus is generally limited to the largest multi-dealer antique mall in the region, as I am a distinguished and refined elderly lady. But we were feeling good on this particular Saturday, and decided to cough up that two dollar parking fee in order to go slumming. It was to be an exciting adventure. The last time I had been to this place ten years ago, I found one or two good things. I think I had some good memories? It all sounded like a great idea, at any rate.

We rolled up and nothing seemed particularly amiss. We expected there to be some odd folk all over the place, and it’s not like we are the living breathing symbols of normality, either. However, the odd character type seemed to be actually only be a steady wave of a thousand Confederate flags as far as the eye could see, punctuated here and there with shirts about not treading on a snake, and antique farm machinery hanging from the ceiling. But I won’t bother with describing what everyone reading this probably expected. There are probably flea market stereotypes that we had somehow missed these last several years.

After crisscrossing several corridors and finding very little that appealed to us, we decided to follow the smell of carnival food because we hadn’t eaten yet that day. We wound up in a food court that was also the gathering place of the social set which also happened to be an unexpected dance club that sure was booming at one in the afternoon inside of a flea market. The lights were much dimmer here, and there were flashing orbs of many colors. There was a tiny DJ booth occupied by an old man in a vest who was playing “Uptown Funk” at first. A lady of indeterminate age and mental faculty was dancing like no one was watching right there in the middle of it all. 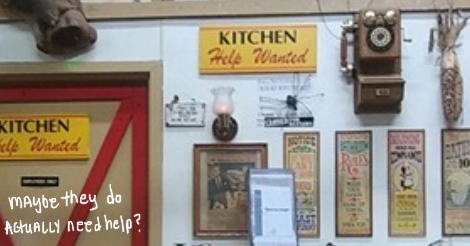 I don’t know how Lisa was doing, because I instantly got the tunnel vision I experience when I feel embarrassed for a stranger, or in this case, a whole lot of strangers who were doing bizarre things in every direction. The dancing lady was the least of my concerns. People in the various kitchens were dropping loads of… I’d say dishes but we were served on paperware. There were elderly people trying to clap in rhythm. There were some people yelling in a friendly manner at each other from across the room instead of meeting somewhere at a distance where they could speak at acceptable volumes. There were an awful lot of dogs in there, too, either in purses, or wearing makeshift clothes that told the world that they were there as service companions. All dogs were watching people bring food to their mouths, which of course then led me to also look at people eating — one of my least favorite things to see.

As we stood there in a food line that was moving astonishingly slowly for a place that seemed to only serve chicken tenders in a few forms, this line that was much too close to the dance floor, the DJ decided that it was time to play Christmas Tunes. Not JUST play them. I am sorry, I have deceived you. He decided to karaoke them. This septuagenarian just had to mangle the lyrics to horrible music from out of a speaker that seemed to be twelve inches from the side of my head. I ventured my first Exchanged Glance with Lisa.

At times like this, I am perhaps overly concerned that my natural snootiness will land me into trouble. While I genuinely believe in the “to each their own” spirit of existence, I very definitely will look like I am judging and judging harshly. Please don’t take it personally, this very personal judgment. Who cares what I think anyway — please don’t punch me, I can’t stop what my brain is making my face show. No one did confront me, I just wanted to explain that there was another layer of tension on my shoulders at this point. 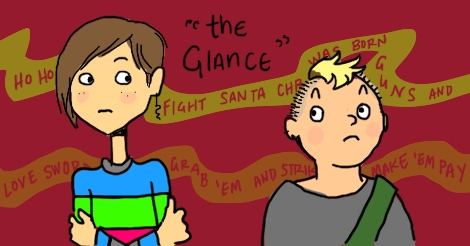 We were another step closer to ordering our food, and I felt like I was another step closer to having a psychotic episode. The old man’s lyrics were slurred and skewed, at best, but I was starting to think that he was singing about killing people. Lines that should have been about mistletoe and snow and being merry were starting to sound a whole lot like they were about “grabbing swords” and “getting guns” and I was not even mistaking “sleigh” for “slay.” I didn’t need to. I began to worry that I was experiencing the beginnings of a truly bad scene that would wind up on the news, but I think recognizing that I was going insane prevented me from going all the way. There’s a helpful pro-tip to prevent you from going on your own spree in the future.

We ordered our chicken tenders (two dry tenders on a stale white bun without condiments or extras, no beverage — $4.50) and the DJ shifted to an impassioned version of Lee Greenwood’s “Proud to Be an American.” This was a crowd-pleaser complete with sing-along. The people sitting near our big dirty picnic table looked to be quite proud of their heritage, but at least no one within our sight stood up, patriotically. I’m somewhat surprised, since that song seems to be revered nearly as much as the actual national anthem.

We stared at our paper plates and felt more out of place than we ever have in our lives — and we both grew up in rural Ohio, please. Are we so out of touch with our roots? These people surrounding us were probably “our people.” Our hootin, hollerin, pickin, and spittin brethren god blessing America and putting the Christ in Christmas, and here were we, unable to participate. Yes, unwilling too, but I can’t imagine we could have even if we had been threatened with bodily harm.

It was at this moment in my taking stock of the things going on, maybe a little more bravely now that I had something in my stomach organ, that I noticed a few framed photos of Charles Lindbergh on the wall, between a racist metal sign advertising tobacco, and a rusty rake looking thing. And I said my first words since it all started: “Why Charles Lindbergh?” I sounded hurt. Pained. 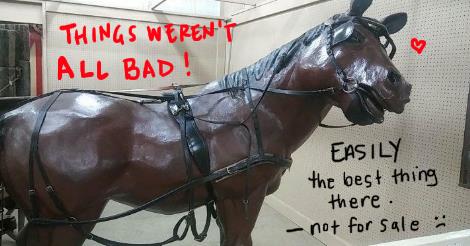 We tried to shop a little more, but Lisa immediately had an essential oil fragrance blend shoot into her eyeball. Then, a woman threw up and we went home and were both terribly ill for most of the following week. That’s enough flea marketing for at least another ten years.