My friends say that guitarists are off-limits for me, but since you’re fictional anyway I’m gonna go for it. In an era of strange and uninteresting male MTV stars, you stood out as at least a hunk. A slacker, nihilist, sarcastic hunk. What a dreamboat. 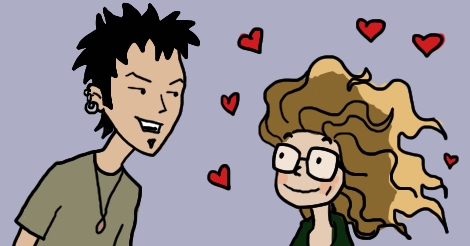 You were grungy, aloof, a little dumb, and hot. We liked your punky skinny jeans and your idiotic lyrics. You spent a lot of time thinking of ways to get more sleep. Same, Trent.

You treated Daria with just enough interest to keep her hanging on, really. For a friend of your sisters, you were pretty kind to her. Letting her go on trips and giving her awkward advice for her boyfriend and his sister’s ex-boyfriend were things that were definitely beyond what your relationship to her obligated of you.

Back to you and your sweet animated face and probably bad hair. Let’s get married and do nothing all day. Okay fine, I changed my mind, you can play some music.

Although, there’s a pretty on the nose scene of Daria imagining her being married to you, all “grown up.” You stay on the couch all day, your music career never took off, and you sport a disgusting pot belly. Almost enough to get over a crush. Except when you consider that she imagined the best possible future for herself, and the worst possible future for you. Not very fair, Daria.

Anyway Trent, I’m going to send my number to your pager. Hit me up, hot stuff.

P.S. When the aliens come. When the death rays hum. When the bombers bomb. We’ll still be freakin’ friends.