One Day At A Time, Again

One Day At A Time was originally a show in the 1970s about a family in Indianapolis. A recently divorced mother of three and her daughters, take things, well, one day at a time. Basically. I’ve never seen that version though, sorry.

This new iteration, brought to us of course by Netflix, King of Television, features the most adorable Cuban family and an opening theme by Gloria Estefan! So far it’s just one season, with 13 half-hour episodes. Rather than three daughters, the main character Penelope Alvarez has two children, a son and a daughter. She also has her mother living with them, Lydia, played by Rita Moreno, a hilarious, nervous Catholic abuelita. 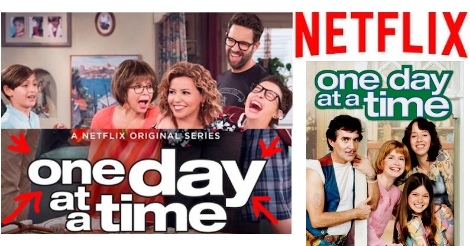 As someone who grew up listening to Gloria Estefan’s music, just starting the show gave me a nice warm feeling and a little flashback to hanging out with my mom. I know the show is about Cubans, but it’s choc full o’ Puerto-Rican actresses. My mom was kvelling. If you’ve ever woken up too early on a Sunday because your Hispanic mother was vacuuming around your body, you’ll know the feeling too.

Penelope, a veteran and single mother, is a tough, self-assured nurse at a practice where she works with nearly incapable men. Also played by a Puerto-Rican actress, Justina Machado she seems a lot like a combination of my mom and all of my aunts.

Rita Moreno, the wonderful Puerto-Rican American icon (and winner of Academy, Tony, and Emmy awards), isn’t the only great part about this show, though. The fierce, feminist daughter Elena is hilarious, although occasionally a little too proud. The son Alex is a crafty, classic little brother character.

Dwayne Schneider would be the best character if the others weren’t all so stellar. He’s a clueless rich neighbor (and the building owner) who is basically part of the family. He’s the opposite of my Spanish roommate Fran, an honorary part of my wacky Jewish family.

There’s even a heartwarming coming-out story, remarkable not for any outrageous reason, but because it’s played so normal, so logical, and so honest. If you’re not watching closely, you may not even notice it! Haha just kidding, but it’s very sweet. And obviously the most caring non-realistic family ever.

The parallel immigration stories are heartbreaking and important. It’s not something they show on family television very often, but it’s a story that touches so many of our lives.

The show is great and I hope it gets more seasons. From what I could tell, this show was Netflix’s version of a tv network family sitcom, with its sort-of awkward laugh tracks and occasional over-explanation of jokes. But if you can handle a laugh track, it’s a fantastic show that you’ll have a hard time not watching in one sitting.