Reminisce About The Three Caballeros

I haven’t seen The Three Caballeros since I was about eight or nine years old at my grandma’s house. And even then, I am not sure if I saw the whole thing, as it is incredibly boring for a child to sit through. If you haven’t seen it, it is basically a weird Disneyfied “documentary” (or maybe it is just “vaguely educational” instead?) that tells you a little bit about our beautiful friends to the south, the Central and South Americans, in little segments. Well, the plot is that Donald Duck receives a mysterious gift in the mail or something and then he watches it and we do too and so we learn with Donald, and that seems simple enough. Except of course that it turns out to be not that simple after all. 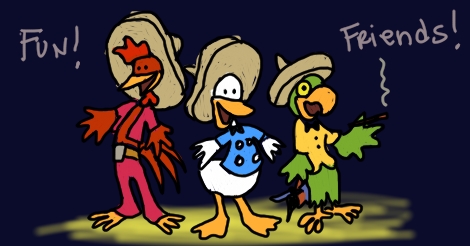 As with all good things, it began with boredom and YouTube, my adventure. And ends with my inability to craft a pleasant looking sentence, it appears! Well, this is what you get. Anyway, the other while ago I decided that I wanted to watch something. Now it is true that there is television and there are cable channels where I am, but it is also true that I have gone so much of my life without having a television of my own that I don’t really want to navigate channels and mute advertisements anymore. So there was YouTube. And somehow or another in the related video list, I noticed The Three Caballeros — FULL LENGTH.

I would link it here, but we all know that it can’t last long. It seems absurd to me that it made it up at all. The version that is free for the seeing right now is actually of poor quality, both video and audio, so you can have your own adventure finding it elsewhere. Or I guess buy it, if you’re into that kind of lifestyle. Also, Dollissa has it on VHS, if you want to borrow it.

I will briefly explain this film to you before I get to the part I want to talk about. Surprisingly, I don’t just review a movie because I watched it. I usually have to have something unusual occur to me at the time. Well, in this instance the unusual thing is the film itself. I sort of remembered the parts with the little birds, and the parrot. But I was surprised to be reminded of how much of this movie is not really about anything factual.

The first portion is narrated by Sterling Holloway and it is about a dopey penguin that hates the cold and moves to a tropical island that was just a little dot. The second portion might be made-up pseudo-truths about tropical birds? That part really confused me. And then a section narrated by some guy about when he was young and caught the cutest winged donkey in the world and then they won a race and “were never seen again.” That was spooky, and also has next to nothing to do with South America except that it is set in the Andes Mountains, I guess. Then the Brazilian Parrot, José Carioca, was extremely Brazilian and has a couple of nice songs. Then the Mexican Rooster, Panchito Pistoles, explodes onto the scene and makes Mexico seem exciting and culturally spectacular and then there’s an erotic acid trip and that’s the end. Donald, José, and Panchito are The Three Caballeros.

You know how people have constant uproars about “oh no that is not child-appropriate!” But then we think back to the movies of our youths (and slightly before) where Elmer Fudd is constantly shooting people in the face with real cartoon guns or the Bad News Bears are being horrendously racist little kids that cuss and mix drinks for an old alcoholic, and we turned out okay and didn’t even realize it was bad for us to see? And actually, I think little kids don’t even understand the bad things and just forget them or don’t store it in their memory banks at all. This is my theory with The Three Caballeros. The reason I couldn’t remember most of the movie’s plot was because MOST of the plot has to do with Donald Duck making everyone uncomfortable by being a nonstop horndog potential rapist. 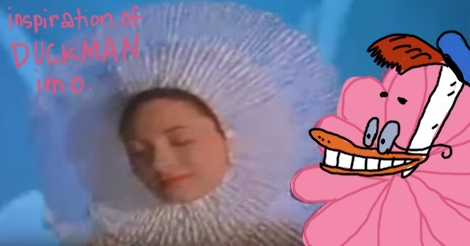 My awkward reactions began in Bahia. This is the first instance of real life actors and actresses being featured in with the animations. There is an illustrated neighborhood, samba music, Carmen Miranda’s sister, and Donald Duck’s unwanted, unending advances. I think this is the worst part about his behavior. He is not harassing pretty cartoon ducks, but harboring obvious boners for real human ladies. Cartoon ladies would have been weird, too, though. But not THIS weird. José Carioca had to physically restrain him from touching her inappropriately several times, while laughing that Donald is “a wolf.” Of course, in the 1940s in South America, a wolf was the only word they had to mean “terrible sexual predator.”

Later, when Panchito Pistoles yelled a lot about the beauty of Mexico, Donald Duck leched again in Pátzcuaro, Veracruz, and Acapulco. The women reacted well, I can only assume because the actresses were just told that Donald would be trying to dance with them, and were not told to react as though Donald would be trying to get up their skirts, one after the other. Our hot-blooded Latin feathered friends once again intervene, laughing at this oversexed American duck who is acting every bit the sailor on leave, and crack jokes and egg him on and shake their heads, eventually tearing him away before things go too far. At this, Donald Duck FREAKS OUT and threatens them and really, really resents being taken from each bevy of receptive ladies. His frustration ultimately peaks and we are treated to the last ten minutes of the movie, which is a kaleidoscopic fever dream from inside the mind of a sex addict.

As of this very day, that last ten minutes are impossible to find on YouTube and I don’t have TIME for this. But I have found the scene from Acapulco where they horn from above and terrorize the lady population of the beach and it will hopefully be up forever and ever so that I don’t have to come back and edit this article periodically for the rest of our days.

I do not remember any of this from childhood. What were the adults thinking? Did they even notice? This is from the 1940s, did no adult ever notice?? As I sat there watching this full-length feature film of awkward debauchery, at turns delighted by the visuals and music and horrified by the antics of a cartoon duck, I just could not believe it.

And that, my dear readers, is usually what it takes for me to want to review a movie for you: mind-shattering disbelief.