Santa Claus knows how to live. He has a wonderfully cozy home in the Land of Igloos, unlimited cookie access, and Mrs. Claus makes him a Christmas Dinner almost every night. He doesn’t have to do anything that exerts him physically because he has a legion of well-paid elves to do his bidding. Unfortunately, this rich lifestyle can lead to health problems.

Santa is becoming a little “jollier than usual” if you catch my drift. 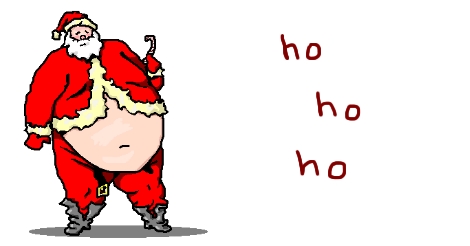 The elves work their tiny fingers to the tiny bones in order to make the Good Children’s toys extra-wonderful this year. When Santa makes it in to the Toy Shop in the late after-noon, his breathing is labored, almost sticky, and he seems to not really pay attention to the toys’ fine hand-crafted detail. Instead, Santa‘s eyes are on the elves’ refreshments.

After a few months, Santa doesn’t show up to examine the elves’ progress. No, he is in his recliner, eating a ham snack and watching a talk show. When questioned about his decline into wretchedness, Santa becomes angered and his greasy beard begins to twitch.

Nobody can tell Santa how to live his life! He built the entire Christmas racket up… by himself! If it wasn’t for him… … thousands of elves would be out of a job! 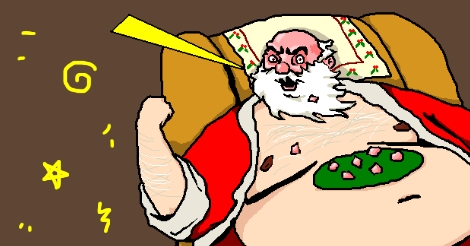 But Santa must stop his rant and place the chair back into its recline position. He is sweating and pink like so much cooked ham, which he begins to eat again.

Although Santa‘s blood pressure has risen, and he has developed an uncontrollable temper, Mrs. Claus still supports her husband. She believes that he is so wonderful, that he deserves to eat heavy foods everyday if that is what he wants. She bakes another batch of gingerbread men for her little sweet roll of love.

After a particularly hard year of eating candy and other assorted goodies, Santa has become bed-ridden. He claims that Mrs. Claus purposefully made tainted pudding, but everyone knows. Santa is just too lazy to move. 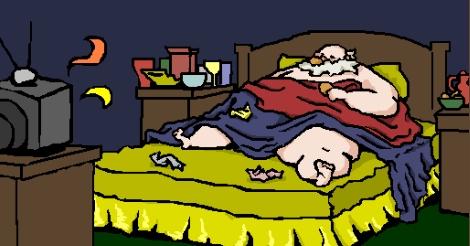 Santa has moved the television into the bedroom. He prefers to remain in bed. Crumbs speckle his Santa jammies. Mrs. Claus has begun to worry. Until now, she had figured that he was just wanting to appear more cuddly and jolly to the children who stay up late to see him on Christmas Eve. She realizes that she has been mistaken.

It is winter now. The Claus Bedroom smells funny. Mrs. Claus has employed elves to help her with feeding the enormous Santa and changing his bed pan around the clock. Nobody smiles here. All activity is grim. Santa eats potato chips.

The stench has reached the point of no return as Santa sweats all the time and bathing is too difficult of an activity. The physical exertion of living exhausts the great, obese, not-as-jolly-as-he-used-to-be elf. Mrs. Claus sleeps in the spare bedroom now, crying for her lost Santa. Santa cries for another loaf of bread.

Christmas Eve. Santa is found dead in his bed of a fat-related heart attack. The elves forklift his body to the piano case which cannot entirely contain him. He is delivered to the polar bears. There will be no more Christmas for the boys and girls. 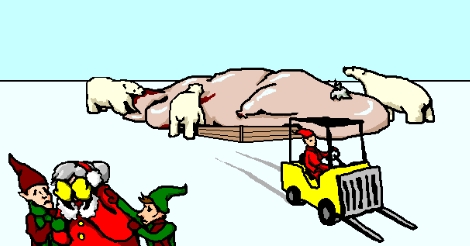