I am pretty sure that most people have security blankets as children. I use the term as an umbrella term for any sort of security thing, as I know many of us did not exactly use a blanket.

My first security blanket was actually a pillowcase, I’m pretty sure. I only barely remember it. What I mostly remember well is how it was lost. We stayed at a hotel, at Disney World maybe? The hotel staff took the pillowcase as if it were one of their own to launder, even though it was covered in what I assume were either marker or makeup stains, judging by the bright colors.

Teddy, though, I’ve had for 25 years. Here is what he looks like. 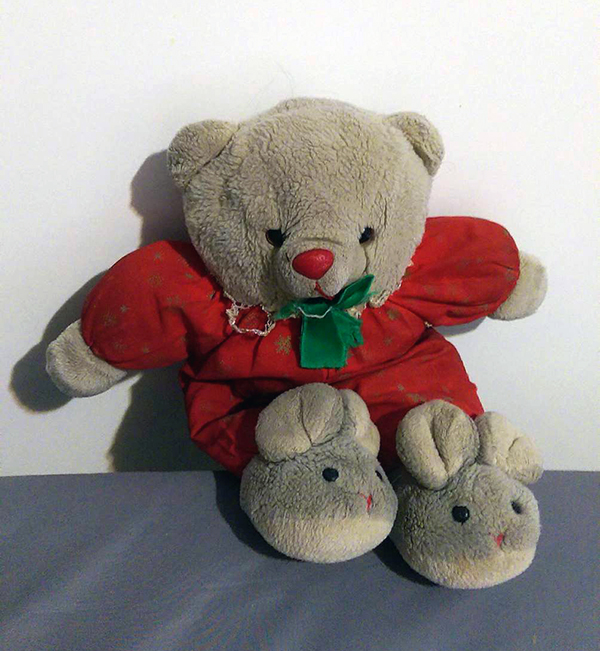 He’s pretty dirty but I don’t have a washing machine and I’m afraid to relinquish him to my laundry guy. I could hand wash him, but I’m not sure it would do much.

I got Teddy as a Christmas present. If you didn’t already assume from his green and red pattern, he’s a Christmas bear. We get along pretty well even though I’m Jewish. He’s got bunny slippers on, which I also named because of course they are alive slipper bunnies. Their names are Spinny and Minnie.

Here’s me at around that age:

When I was first given Teddy, I was elated. I think. What I really remember, very distinctly, but probably only from being told the story because let’s get real here, is that I grabbed him by the hat and swung him in a circle while I spun. Teddy flew off of the hat!

For a long time, Teddy Hat was my security blanket. I carried him everywhere, even in high school. I held onto him every night when I went to bed. During the day, I’d grab him in my worst moments, clench the soft, flimsy piece of fabric in my fist.

Ultimately, this dedication backfired on me. I left him in my friend’s car and she was too busy raising a child to care when I called her crying to ask if she’d found it. I don’t even blame her, even though I surely did back then. To this day, I have dreams that I find it, right there behind the couch in my old home in Rockaway, New Jersey. But the real nightmare is when I wake up, heartbroken.

The Allegory of the Hammer

So it’s possible that I heard this somewhere as a child, but I can’t really find it anywhere, so more likely I was a brilliant girl tapping into the universal god mind. I have been using this excuse – this story – for as long as I can remember. It references a hammer.

A man loves his hammer, let’s say. He has had this hammer since he was 4 and received it as a Christmas present. It’s a very simple hammer, consisting of only two parts: a steel head and a wooden helve (or handle).

One day, while hammering I guess, the handle broke! It is unrepairable. He replaces the handle on his beloved hammer with some nice new sturdy wood.

Years later, content with his childhood friend of a hammer, he is met with a difficult task. He has to hammer so hard! The hammer breaks! This time it’s the steel part. Pretty crazy, but it broke. He definitely can’t repair this, so he replaces it with a fresh new steel head.

At night, that night, he tosses and turns in his bed. He paces around his room. He is freaking out, you guys. Why?

No part of his original hammer remains. Is it the same object? Does he love this hammer? Does he have any connection to it at all? Is it the childhood hammer that he loved all his life?

And that, my friends, is why I will never replace Teddy’s lumpy grey stuffing.