We, the writers of Sneer Campaign, are not complete philistines. Occasionally we like to raise our pinky fingers and sip on hot tea while discussing some of the finer things in this world. Sometimes we cover matters of history, other times we may speak at length about books we have read, or scientific breakthroughs that had been brought to our attention somehow. Other days, we sit around analyzing classic artworks — but never modern art because we are not sophisticated enough to “get” it!

Today, we decided to take a look at the Last Supper, by some kid named Leonardo da Vinci. He had his day back in the 1400s, but do not let that frighten you. Those days were not so different than these days we are in now. So take our hands, readers, and appreciate the history of art, religious beliefs, flippant artistic subterfuge, and yes even a little Last Supper Day Miracle! 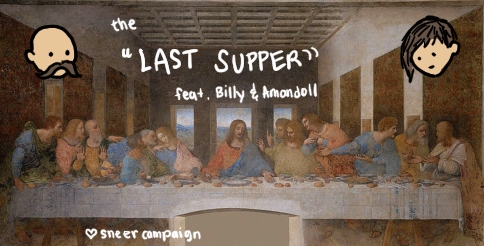 Billy: What about it?

Amandoll: My friend and I noticed it on a postcard in a shop. Well, we noticed something quite peculiar about it: You are in it. There, on the end.

Billy: I seem to appear several times in it.

Amandoll: We were puzzled as to why you were at THE Last Supper with a certain Jesus H. Christ. You seem puzzled in the painting, as well.

Billy: I have my reasons. 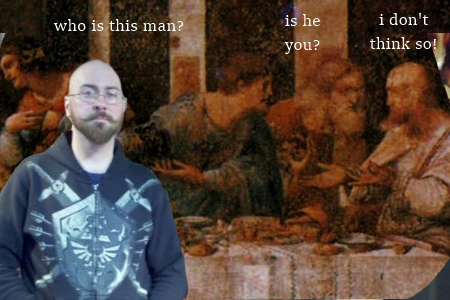 Billy: I was complaining about how big of a mess the table was in, with food apparently everywhere.

Amandoll: They ate as slobs. They never mention that prior to this painting being snapped there was a holy food fight.

Billy: Everyone seems to be rather angry or confused.

Amandoll: Tell us, was that a lady on His right hand side? I do not know how people can insist that it is just a HUGELY effeminate young man. Considering the strong homophobia of many Christians, you’d think that they would feel more uncomfortable that such a gentle and lovely young man sat so close to the Christ.

Billy: Isn’t that the Virgin Mary that was omitted from it long ago but they found out was in it? I think it was in that movie where Tom Hanks had that incredible hairstyle. All the men on the left side are quite interested in that person, I will tell you that much. A train forming, perhaps? A Holy Roller.

Amandoll: There is a sly hand creeping over her womanly shoulder. 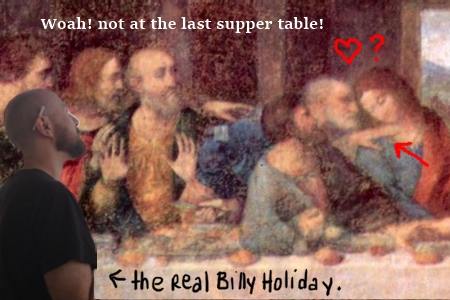 Billy: My favorite is on our right side, the guy next to Jesus with a finger up. He looks like Dustin Diamond. The Last Supper was an all-star affair.

Amandoll: I think he is saying, “AND ONE MORE THING, Jesus.” The third one to the right of Jesus, in the orange, looks quite feminine as well.

Billy: So it seems.

Amandoll:  “O, Jesus! I wilst expose mine bosoms to thine eyes so that you may gaze upon them!” And the other Mary is like, “oh lord, there she goes again.” The man in blue next to orangey there, with the short Wallstreet hair-do, he can’t believe it.  Many of them just Can’t Believe It. 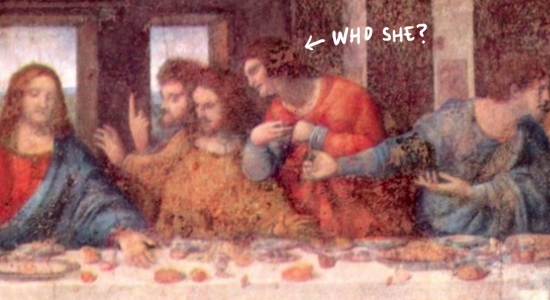 Billy: I am interested to know why everybody was sitting on the same side. Which did you think was me, more so than the rest?

Amandoll: The one on the very end with the lack of hair and the abundance of goatee.

Billy: Yes. Those are my two main traits.

Amandoll: According to the card, he was “Simon,” which is a hilarious name for an apostle. The rest all ended in -as or -us. Daedalus, Judas, Jesus, Roberticus, Simon.

Billy: Yes. Also, I am talking to Santa Claus it seems. 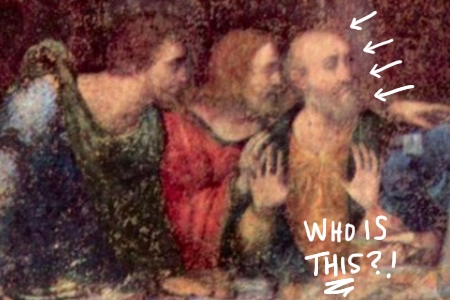 Amandoll: Well, I’ll be! It seems that if you look to our far left, the second to the right – that is none other than Jesus again! Jesus his own self! Showing off!! Being in two places at once, acting surprised!

Billy: The lord works in mysterious ways. And another me next to him. We competed to see who could replicate themselves the fastest. 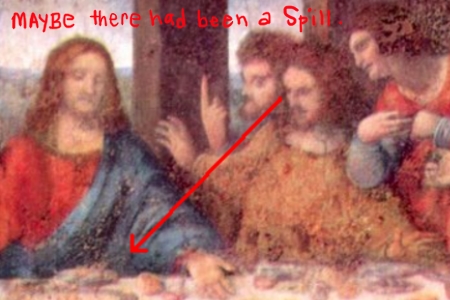 Amandoll: The hippie on Jesus’ (our) right appears to be checking out the holy groin and is taken aback.

Billy: His robe must have ended at the waist.

Amandoll: “Forsooth! what dost thou bring me, O Holy One?”
“Taste of it, apostle. For it is kosher.”

Billy: Awful. I am sure he stuck around for the second coming also.

Amandoll: I know that while the godless da Vinci was painting this, he made all of these same jokes. That is why they are painted in these poses, and this is why he is a master painter. He conveys it all so clearly. 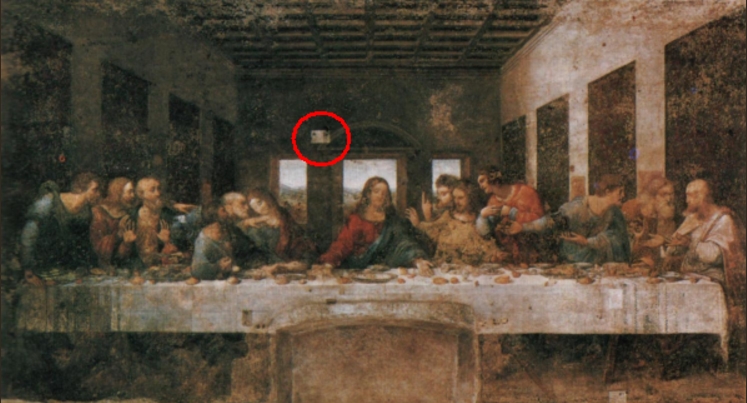 Billy:  Is that a smoke detector on the doorway in the background? Is it painted there? Was da Vinci so brilliant that he could predict the existence of safety devices such as that?

Amandoll: Do you think that the owners of the church this was painted in were just like, “We need this place up to code or else they’ll close it. Okay just slap the smoke detector on the Last Supper and call it a day”?

Billy: Well, safety IS important. Jesus would have wanted it that way.