Do you have RFD-TV? Have you ever even heard of it? It is a television station devoted to rural living and rural concerns. I know you city slickers out there just scoffed out something like, “what, so like, shows about corn and tractors?” Yes. That’s actually exactly right. Throw in a little casual gospel music and perhaps talk of quilting, and that’s it. It is a wonder of a channel, let me tell you.

Back when I was a younger sort of person, I would visit my parents, or be living with them, depending on the year or month of that time of my life, I discovered this station and its outstanding, high-quality programming. Sometimes they would speak of corn — which is more interesting than you probably are willing to believe, and sometimes they would teach you how to teach horses. That was more interesting to me, although just as relevant to my day to day existence. 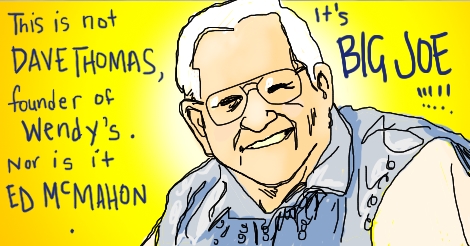 I didn’t really have a particularly favorite show, however. RFD-TV was like that strange channel that featured snippets and clips of audio visual “art.” You would just tune in and tune out, as they say (do they say that?), as you just vacantly watched footage of fields and a rural voice speaking. But then one magical day, I caught the Big Joe Polka Show. I was infected by the RFDTV BJPS Bug!

Admittedly, I have always liked polka music for some reason. There’s a confession for you. The oom-pah beat and heavy reliance on tuba is a delight to me, for reasons unknown. I did not grow up in the polka regions of the world, which seems to be either Germany or Nebraska, but I know good music when I hear it — I swear I do! Give it a try, open your mind.

Big Joe (RIP) was a true icon, a living legend. Dressed in fine what I assume is Polka Regalia, this man seemed almost like an animatronic attraction. I never even once saw him standing, presumably because I started watching him late in his career, and he seemed to be larger than people normally are. He kind of reminded me of a handpuppet made to fit a frighteningly large hand. He was God’s handpuppet, promoting the Northern Midwest’s largest cultural offering. This kindly grandfather type would sit off away from the crowds and announce each and every band that was to perform.

The music ranged from okay to great, but the real stars were the gentle folk who were there for a good time. Grannies and Rose Nylunds would drag their husbands or best friends out to that dance floor and twirl around in complicated patterns. These people had a culture wholly unfamiliar to me and I admit it, I was a little jealous. Was? I still am!

I truly hope that you people in Omaha, Texas, Missouri, Wisconsin, etc (it was a traveling show, they toured) keep this lifestyle alive. It had better not die out with whatever generation it was that I saw having a good old time. Don’t you DARE let Big Joe’s life have been lived in vain. I hope there is some piece in our genes that flips the switch from “this is lame” when we are young to “of course this is fun” when we are a little older. Well, maybe not in everyone, because I do want society to progress in other ways. But I definitely want society to still allow for polka dancing! Even if I, myself, will never ever participate beyond watching reruns, enthralled.

A little modern day update, by the way: I signed up for the BJPS Newsletter way back in forever ago, and I still, to this very day, occasionally get advertisements for Polka CASSETTE TAPES. Not only is that amazingly outrageous, the cassettes are like $20 each. Amazing. What an amazing world we live in.