The IKEA Effect is the Dysfunction of America

I have vivid memories of my first day in California. I remember clumsily carrying three large bags from the airport to the rental car center. I remember intentionally ordering a Mountain Dew when I stopped for pizza, because my new city was named Mountain View, and “drank a Mountain Dew in Mountain View” was going to make an excellent first status. I remember my landlord arriving late in her pajama pants and oversized sunglasses to hand me the apartment keys. Most distinctly, I remember the thoughts I had in IKEA that night. 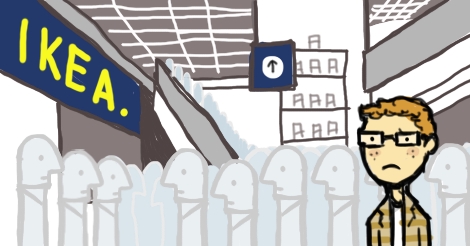 An IKEA anywhere else in the country could be just as unwelcoming. They are always a maze. They are usually crowded. Feeling lost in a sea of people takes on extra meaning, though, when they are all guaranteed new. I had a 0% chance of seeing a familiar face, regardless of how many faces lurked around every shortcut, eyeing up various Malms and Röyksopps. Everyone was busy, too busy trying to solve the IKEA puzzle to hold a conversation if I somehow decided to make a friend. In theory none of this should have complicated my only plan, buying a bed. Buying a bed on day one had been the plan for weeks! Drowning in anonymity, I began to doubt everything. I bought pillows and sheets at IKEA, but I stopped at Target afterward for an air mattress.

Six years later, I can thankfully say I’m still here. It didn’t take me too long to buy a real bed. And I began recognizing faces. I’ve run into folks I know at the grocery store, the How Weird Street Faire, the Musée Mécanique, and most recently a math rock house show. But today in a crowded Target, one day after my Californniversary, I thought about that IKEA. So many people occupied the space around me again, none of them familiar, all of them focused on buying items (in this case before a rainstorm). Nothing had really changed. How could the IKEA effect still be haunting me six years later? When does it not exist?

Many people consider college the best years of their lives. Some folks like the wild parties. Others enjoy the first taste of freedom, the value of education, the flexible schedule, the ability to nap. I personally give the most credit to its sense of community, the purest implementation of such a thing you are likely to find in America. The campus bookstore is where you can shop among people you know. Friends live right down the street, often in the same building. Walks to class involve smiling and waving at someone, chatting if you’re headed the same way. College life has the quaintness I imagine European villages have. IKEA, despite its heavy Swedish branding, is grotesquely American.

But I can only blame the store so much. Really it’s a product of isolated living. Some of what I described about college exists at office jobs, but people come from such disparate locations. You can talk around the water cooler, but not during a car commute. Not at the store. Not by knocking on a nearby door. If you can, I envy you. Maybe you have a spouse or friend in the next room as you read this. You should go say Hi. Give them a smile. You’ve avoided IKEA. 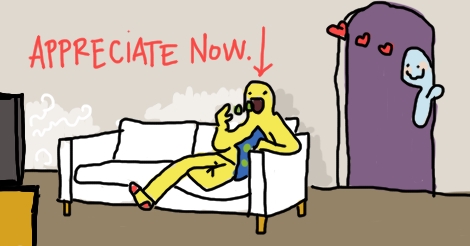