A Requiem for Happy Endings

This is about a beautiful show that we will never forget, over before its time. Happy Endings only lasted 3 seasons, but was definitely one of the best sitcoms to ever be on television.

The show got off to a rocky start with its boring premise. That premise, which also features the two worst characters, is that they, Dave and Alex, were about to get married. Instead, Alex runs off with a guy who rollerblades up to them and leaves Dave behind to bore all of his way cooler friends. When Alex comes back, they all hang out, and Happy Endings, the sextet of comedy that we will cherish forever, is born.

Since the boring twins were presented as a couple, I’ll do the other four characters that way too!

Jane and Brad are TV’s best married couple, hands-down. Everything about Jane is perfect and crazy, and not in a manic pixie dream girl way. She is crazy in a normal, insane person way and it charms my pants off (Brad’s too). Her adoration of formal shorts is also a great thing and makes me envious.

Penny and Max were the stars (and both actors have been on other televisions shows since). Penny was the Queen Bee of the group. She was the diva, the entertainer, the hilarious mess. Max, according to Penny, was “the worst gay.” He was messy, dressed sloppily, had no money, was always running a scheme (even on his friends), and was basically the laziest man alive. He’s what we all aspire to be, right? 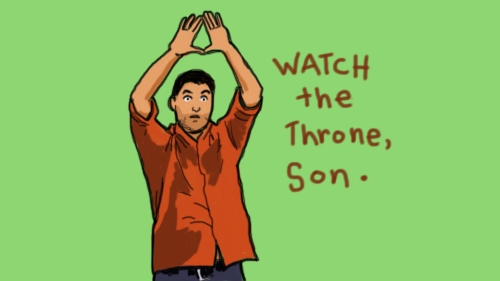 We will miss Happy Endings and its abundance of references and genuinely original sitcom plotlines. It’s too bad it didn’t have a real-life happy ending, but maybe that would just have been too on-the-nose.

Where can you watch it? I don’t know, in my heart? You’ll figure it out. But make sure you do.