Recently, I was shopping when something occurred to me: I had left my wallet at home. Also, I noticed that there was a large amount of shelf space devoted to various shaving devices. Lotions, creams, oils, all manner of blades, chains, whips, and soldering irons abound in the shaving section. Intrigued, I started querying a clerk about some of the more exotic items. 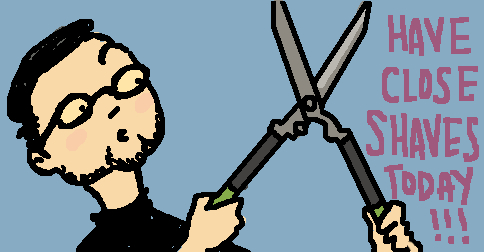 “Fascinating items you have here,” I said, holding up a large instrument. “What do you call this?”
“Pruning shears,” the clerk replied.
“Ahh. And how does one shave with this?”
“Sir, this is a hardware store, and that is a weed whacker.”
“In that case, I wish to complain about this Wing Nuts breakfast cereal.”

After I had sorted things out with the store manager, my mind returned to shaving. How was it invented? And why? I resolved to find out. A trip to the library was in order.

“Pardon me, but where are your books on shaving?” I asked the young librarian.
“First, I don’t work here, and second, this is veterinary clinic,” he replied. I had wondered why he was holding a dog.

Obviously, my plan to appear more decisive by walking into places without reading the signs was going to need some work.

Finally, I found what I was looking for on the Internet. “Busty Blond Coeds Are Hot For Lonely Geeks!!!” I often wonder if any coeds ever manage to graduate, as all their time seems to be devoted to finding new ways to break Commandments. Eventually, I got bored and wrote this.

For untold millenia, the removal of facial hair has preoccupied Man. Since the beginning of time (a Tuesday), Man has wondered why he gets hair on his face, and why Woman always wants him to get rid of it. 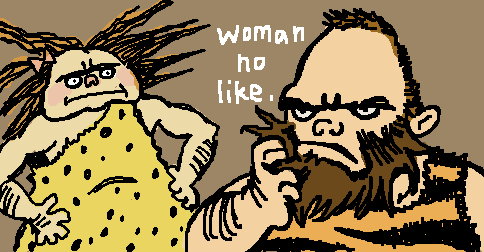 In prehistoric days, Man had few options. “Ooga,” his mate would say in a disapproving tone. “Ooga bundalo.” So man would wander off dejectedly, possibly going to a nearby slime pit to see if any divorce lawyers would ooze out. But few did, so Man had to improvise ways to remove hair. Two options were most common:

Things got slightly better in the Middle Ages. Steel had been invented, so Man had a useful device for shaving off the stubble, and it also could be polished into a reasonably reflective surface so that Man didn’t cut off, say, his nose.

Now Man was often clean-shaven, with a hair-free face, covered in thousands of scabs from where he had nicked himself with the knife, and pimples from where the skin had been irritated from having a rusty piece of steel repeatedly scraped over it. This is why so many knights wore helmets. It was truly a good time to be alive.

Knight: Verily, good wench, I am clean-shaven, as thou had requested. (takes off helmet)

Wench: (dies of the plague)

Some major advances finally came about in the nineteenth century. Straight razors and shaving foam came about, enabling Man to shave closer, and with fewer scabs, than ever before. Woman was thrilled. “Your face is smooth as a baby’s butt!” she’d say, because baby butts have always been the standard for such things. I apologize for not mentioning it sooner. 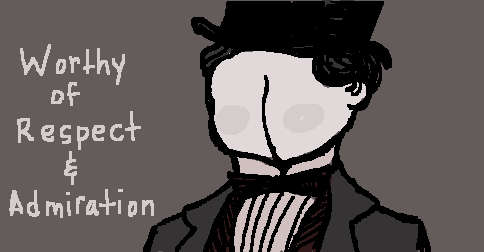 Of course, the catch here was that straight razors were, well, huge razors. If you didn’t know what you were doing, you were liable to just slice open your jugular and bleed to death before you finished scraping off your upper lip. Enter: the Barber.

Barbers played a large role in nineteenth century America. They would have in Canada, as well, but all that was in Canada at the time were large hairy bears and larger, hairier men, and both were content to stay that way. So any barber caught wandering the tundra was severely beaten.

But in America, particularly the small towns, the barber was an important man. Not only did he cut hair, but he also was trained to use the razor, both to give nice shaves and, I swear that this is true, to perform surgery, all from the comfort of the barber chair. The red and white striped barber pole came from the barber’s practice of wrapping blood-soaked towels around various poles, such as porch columns and hitching posts, to dry. The white came from a barber’s practice of painting his storefront white, to symbolize cleanliness. And that is probably all the true information you’ll get from this column.

So the barber was the man to see to get the desirable baby’s-butt facial texture, provided that the barber remembered to use the razor as a delicate shaving instrument, and not in Invasive Surgery Mode. Many a good man lost his cheeks to a distracted barber.

Finally, the twentieth century came about, and with it a realization that there was a real market for face-scraping. This brought about brands like Bic, Schick, Gillette, Firestone, Smith & Wesson, and the legendary Burma Shave.

Burma Shave was famous for its unique advertising method, which consisted of a series of four to six small signs on road sides, each with a single line of a poem. The last sign always bore the “Burma Shave” logo. To wit:

FOR READING THESE SIGNS

BECAUSE YOU FAILED TO SEE

THAT CURVE UP AHEAD

Finally, comes the era we all know, one I like to call: Now. Now, Man has a plethora of shaving tools at his disposal. Shelves of shaving foams and gels, fortified with Vitamin E and lubricants and aloe, all of which fail to keep the razor from leaving large red irritated patches and thousands of scabs. Man also has the Electric Razor, which, in a miracle of modern technology, requires no lather to fail to remove the hair. We are truly blessed.