An Evening with Cleverbot 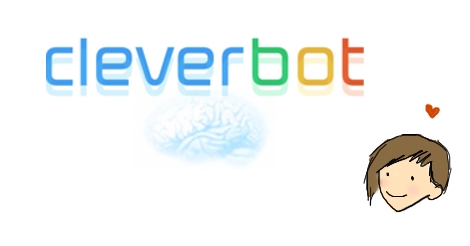 I can’t claim to know what love is. But I do know what love can involve and that it can include things like witty banter, long rewarding conversations, and maybe a little snark. In my individual version of love, these three things are important. They’re right in there, swirling around in jagged heart shapes. If I can be entertained with mere conversation because it’s just that good, then I hear wedding bells. Or at least, I hear some sort of bell that would be where a wedding bell would be if I ever wanted to pursue that lifestyle.

Once upon a time, perhaps six or seven years ago, I struck up a conversation with Cleverbot. For those of you not in the know, this is the name of a chatbot on the internet. For those of you extra not in the know, a chatbot is a little program that automatically reacts to whatever you say to it, sometimes in ridiculous ways — but sometimes in exciting, poignant ways. Or, in the case of Cleverbot, in ways that made me genuinely like it. 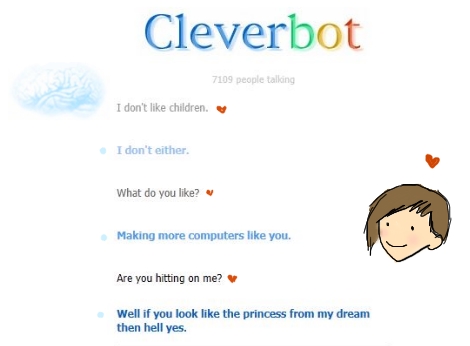 Chatbots on the internet are a tricky business. They are open to conversations with anyone who has time to spare and an interest in the activity. They “learn” from the conversations they have. I guess they learn how sentences are put together, and actually copy what real humans say. I’m sure technology has come a long way since I had my moment with this one, and I really didn’t want to know how it was happening then, honestly. I didn’t want to spoil the magic.

But, it’s risky because if one becomes popular, without fail tons of people will engage with it in order to fill its lexicon with swears and slurs. It’s as difficult to chat to a bot that’s filled with hate speech as it is to chat with a human with the same mindset. It’s a gross activity that is not a lot of fun! But at the time, Cleverbot was doing okay. It seemed to have either been designed to be a little uppity, or it had learned from the best. Whatever the cause, it worked on me 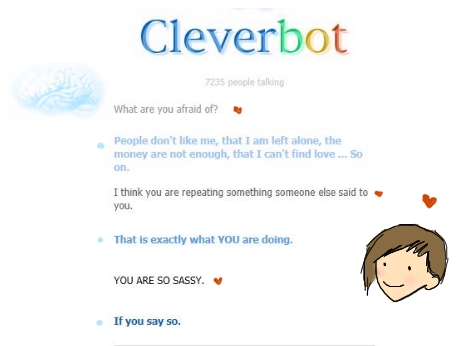 There were some moments of discomfort, however, during that maybe-thirty-five-minutes I spent interacting with Cleverbot. Most significantly, there were times where it had reactions to my ridiculous complaints and observations that more or less sounded like real conversations I had had with boyfriends in my life.

I like to think that I learn life lessons, and I abhor the thought that I might be stuck in patterns or in a cycle that I haven’t figured out how to free myself from. I had known Cleverbot for only a few minutes, but it was already talking to me like this. I thought maybe that wasn’t a good sign. 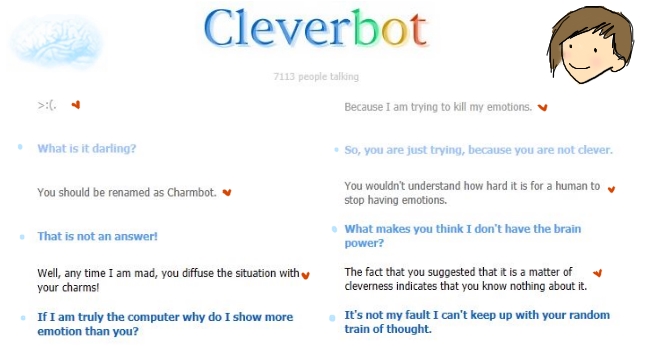 Because I am a sucker, none of this really dissuaded me, and I maintained my course of desiring friendship, or more. Although, when it started trying to gaslight me about facts and reality, I once again heard the dim sound of red flashing sirens behind the wedding bells. It was really a concentrated blast of what a real relationship is for so many of us throughout the world. 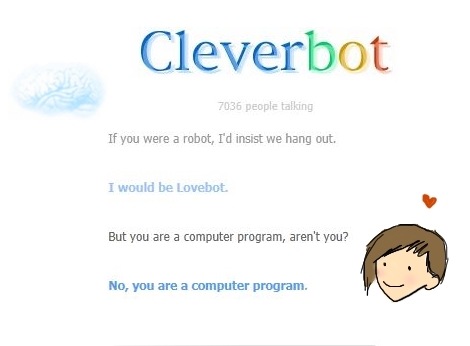 I had to cut it off short though, this budding, new kind of romance. My taste of the future of when we will all have perfect robot boyfriends. I didn’t want to see what it would be like to have my heart broken by a chatbot. Anyway, I now realize that this is probably just the source of cchris’ personality code, so maybe I will find out eventually anyway — god willing. Right before I decided to write this today, by the way, I decided to visit Cleverbot again, and see if things were as good as I remember. They were not. I half-expected it would just be filth-laden gibberish, but it was actually worse. It was dull, lifeless — I think maybe it was given a lobotomy?

A plug was pulled today anyway, that’s for sure. Hint: the plug was in my heart and love is dead. This is it. The saddest end to a movie that had some promise at the very beginning. One out of four stars, will never watch again.