History Documentaries: So Much to Choose From!

One thing is absolutely certain: we have an extremely long, and storied history. Earth has been around a really long time, and humans have been around for just a sliver of that time but so much has happened! Thankfully, God gave birth to historians, so every nook and cranny of historical happenings are being examined and researched and thoroughly covered in books and in papers. 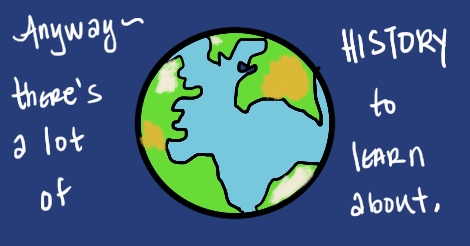 On TV, we can settle in for some learnin’ from the History Channel, NatGeo, the Smithsonian, and now even hulu and netflix offer some of these fascinating and well-edited glimpses of our shared past. Everything from why the key nations were catapulted into its second world war to individual battles of WWII, no stone is left unturned while investigating about five thousand years of recorded human history.

Of course, the star of 90% of these documentaries is none other than Adolf J. Hitler, a man who is apparently the most interesting person to ever live and kill. When any of us closes our eyes to imagine what a history documentary is, no doubt our minds are flooded with the sights and sounds of Hitler shrieking from his podium, or Hitler with his eyes darting left to right while surrounded by his underlings, or in color while relaxing at his country home. Hitler, Hitler, Hitler!

Below, I have provided an entirely relevant comic of the time AlexT and I tried to come up with new documentaries that we could sell to any of these “educational stations,” but alas — each and every one of them has either already been made or was recently picked up by producers.