I intend to begin a series of games articles today, with or without the help of my trusty sidekick, cchris, that take a look at the games out there in the world that are meant for girls to play. Even though I write tons of gaming articles (even though these are generally hardly even to be considered games), I am really not a “gamer.” I am dimly aware that there is a whole Girl Gamer Culture out there, and that there are politics and strife and some kind of women’s liberation movement screaming for equal rights and respect while playing various games, because not only are games a serious part of life, but opposition to women doing anything or having any fun is everywhere at all times. But I am not here to fumble around with explanations about topics I know next to nothing about. WAIT YES I AM. But the topic I choose to fumble with is games, not with complicated social issues.

Hasbro has a bunch of little games on its website, but I haven’t bothered to explore them. Really, I wouldn’t even know that Baby Alive exists at all except that one day cchris linked me to this one, thinking that it would stir up my maternity instincts or foul-mouthed rage – one or the other. He has his own reasons for experimenting on his friends and they are not reasons I bother to question. The only thing I am left questioning, actually, is why I click any link he offers me.

But I do, and I did, and I was immediately disgusted by what I saw before me. Truth be told, as soon as I realized what I was seeing and hearing, I complained to him and threatened to turn it off. Then of course, I proceeded to play the game. 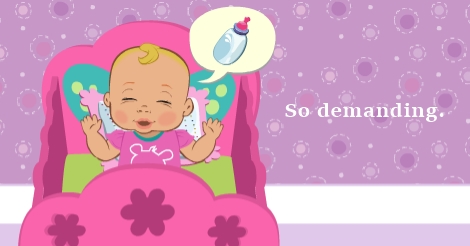 At first you have a baby in a crib, which is of course a baby’s natural habitat. Unlike real babies, which scream and cry all the time for things that you have to guess about, this baby coos and has soft music and thought bubbles to tell you what to click. It only ever wants its bottle, a toy, or a diaper change, and then back to the crib for a nap. That’s all.

At first, I searched in vain for a bucket of water in order to end the game (I am saying I wanted to drown it). Then, realizing that they did not provide that option for the preschool demographic which MUST be the target audience, I tried to make things more fun by giving the baby the wrong things. I couldn’t, really. Then I tried denying it food for starvation, or leaving it to grow increasingly filthy in its own waste, or to become psychologically anguished from a lack of enrichment and play. None of these things happened. Instead it just waited until you gave in to its demands just to see if things changed. 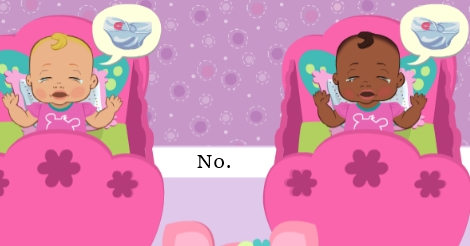 They do change!! As is so often the case in life, after you take care of a little baby for long enough, you will suddenly find that you have two! Maybe you are fertile, maybe you are good at your babysitting profession, maybe you are in Hell – whatever the case, there’s more baby. And oh no! Sometimes they want the same thing at the same time! Lucky for you, the player, it doesn’t matter. No one suffers. You just have to watch the thought bubble for a few seconds more while that baby learns the virtue of patience. Hey, and so do you as you placidly click on babies and items in order to see if another baby happens. 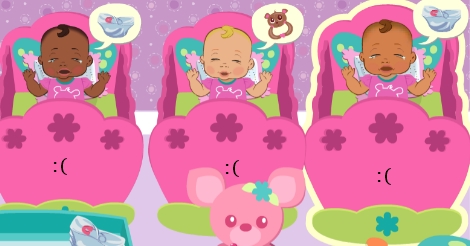 Of course, one does. You can almost imagine how hectic this scene would be in real life as three needy infants battle for your attention. Instead, you just have slightly more clicking to do for a little while as the babies take turns napping and feeding and going and playing. It was at this point that I nearly gave up, but I wanted to make all you game enthusiasts proud by being a total completionist for the first time in my life. No more giving up at the first sign of boredom, frustration, or fright! I would see this thing through. Would there be four babies? Would they introduce the concept of fussiness in the next level? 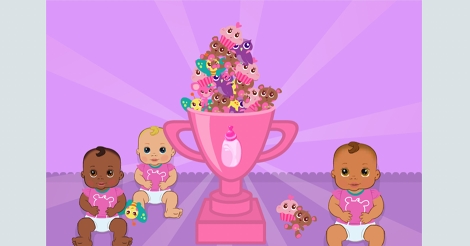 No. You just get a big trophy filled with toys no one can do anything with. What a let down. I may never play a game again, even though I can brag that I completed all levels of this game and achieved the end image in a mere four or five minutes – something to be proud of, I guess. What do you people see in this? What does anyone see in THIS game, particularly? Am I the first person to ever complete it? Is it actually made for the enjoyment of the very young? I really don’t see the point to it at all. It isn’t educational even slightly. It’s extremely slow paced and is actually negative-educational, isn’t it? It makes babies seem quiet and pleasant and simple to care for.

I know that it isn’t like a five year old is going to go out and have a baby, inspired and misled by playing this game, but maybe the seed is sown (oh no that seemed terrible to say but I am on a roll of typing so I can’t go back to change it now) and she will forever think that maybe babies COULD BE this nice. Maybe we should be providing small children with realistic learning games, so that the sown seed could be one that soberly shows through game play that babies are finicky, cranky, loud, and can die through neglect and poor decisions? Would that be too much to ask? It should not be.