Become the Best Clown You Can Be

The human clown is a Halloween costume that takes you a lot of miles down the road to Terror Town. Weak-minded people believe that clowns are, by their very nature, terrifying monsters and not actually just kindly people in grease paint or in rarer cases, serial killers. People who have clown phobia will be made uncomfortable no matter how sloppy your attempt is at applying the right make up, so it is a real winner at any costume party. It is a golden standard of nightmare fuel.

However, there has been a “craze” lately where people think that you have to make the clown scarier. Those fools standing on the sides of roads, frightening people by being clowns where clowns are not supposed to be, seem to always be wearing those latex masks of a “scary clown head.” In my very honest and correct opinion, the very attempt to make it scarier makes it LESS scary. Somehow, clowns are the one part of life where I am brave. I just know that if I ever see a person in a scary clown mask, I would want to slap that mask right off of their face and tell them to get a clue. And that’s about when I realized I also needed to write an article about it in order to keep printed copies to hand out in just such an occasion. Today is the day. This is the hour.

My theory goes that all you must do is simply be a clown. It will make people uncomfortable, but it’s a little boring. To bring things to a more expert level, you will want to combine the clown part with pretty much any other thing. But which kind of clown with what sort of thing? Well, there are three general types of clown, so you have plenty of choices! 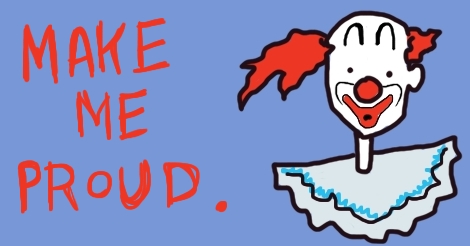 The whiteface clowns have a crisp appearance. They are the kind that traipse around doing delightful acrobatics and are I guess regarded as being sophisticated. The brief research I just did explained that they are at the tippy top of the clown hierarchy and you can bet that this means I am suddenly obsessed with the idea of clown society. You will respect a whiteface clown, or else it will look down on you! It would be right to do so.

There is also a whiteface clown that has exaggerated features that is known as “grotesque.” You can choose whichever look your preference or skill level dictates. Some of them have a lot of implied facial creases, and some of them are pretty artistic looking. Throw on a ruff and a pointy hat and you are good to go. 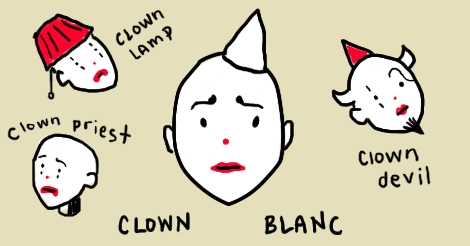 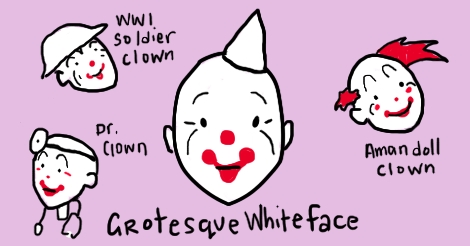 The Auguste keeps a flesh toned base. They are goofy bananas and wear oversized loud clashing clothes and goodtime wigs. They are buffoons and are there to be mistreated, so be sure to encourage other party goers to abuse you. Trust me, it will heighten the discomfort surrounding you.

Get as creative as you want with your Auguste get up, but remember to not coat yourself in that white paint. I get the feeling that if you act like an Auguste Clown while dressed as a Whiteface Clown, real clowns are alerted and they come for you in the night. They will emerge from the shadows and tear you apart into tiny, bloody clown-imposter confetti. No one will mourn you. You have been warned. 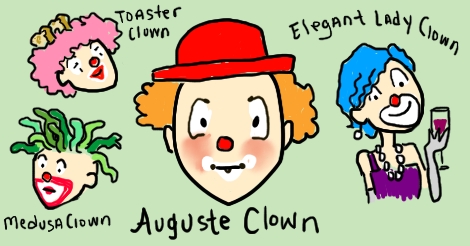 This clown seems at first like it is “a clown based on a type of person” because it is a clown who is a vagrant, out of work and traveling from town to town by way of train-hopping. However, it stands to reason that if someone hired a homeless clown to clean teeth, or to be a police officer, that things could go comically (and then tragically) awry.

Don your worst clothes, the ones with stains and holes. Your face paint is built on a foundation of your skin tone, but you should add grease paint beard shadow (this goes for all genders involved) and probably thicken your brows, add some darker under eyes, and get a stubby cigar into the mix. They seem to keep their natural hair or at least wear wigs that are of normal human hair colors. Choose the roughest from your selection of busted old hats and your look is complete! That is, until you add the rest of the look you are going for. Then things would be complete I guess. 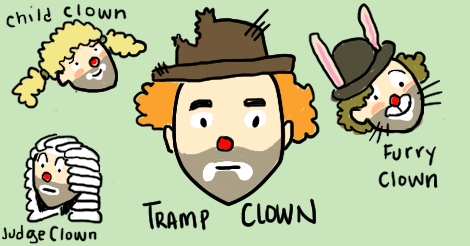 I would like for there to be more clowns in the world. Normal clowns, not dumb scary clowns. Those things are such a bore I hate them so much! But those regular, honest-to-god clowns… They only make the world a brighter, more confusing, and occasionally terrifying place. Clowns, I love you.