That Holiday Between Labor Day And Thanksgiving

Halloween is many things. It is a socialist plot where America is destroyed by letting children accumulate quantities of candy so vast their little pancreases preemptively shut down. It is parents convincing their children that they are about to be eaten by a dracula. It is getting so hopelessly lost in a corn maze that you forget corn can be walked through, and you call 911, and the owner has to give the police officer a map so they can escort you to safety. Unless you’re black, of course. White people will insist that the corn gluten be free range. Having little Kaelybb exposed to anything more pedestrian would be as bad as exposing him to the MMR vaccine.

This is a holiday whose traditions are always evolving. Once it was a religious festival, then a feast for Catholics. Later, all manner of people would carve turnips into grotesque faces, the horror of which led directly to clown makeup and orange spray tans. Someday oldsters will gather the children around the burning piles of Juiceros, Keurig pods, and participation trophies that are our only source of fuel after the ecological crash. They’ll hope it’s dark and cold because it’s October  and not because of the eternal cloud of radioactive ash that always blots out the sun. They’ll tell the shivering, emaciated children tales of shelves with food and what candy was, how we had smart toasters that would tweet at us when our toast was done, complete with a photo of how toasted the bread is. Hashtag #toast. Then the children will draw lots to see who gets eaten, and the elders won’t participate because even now they are selfish, entitled Millennials. 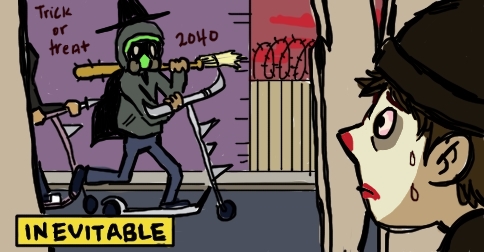 But for now, Halloween is celebrated like no other holiday. For most, it is a time of good-natured fun, costumes, and candy. For others, it’s a time to show that taste cannot bottom out, as evidenced by Native American headdresses made from condoms, Black Lives Matter costumes that come with black face paint and a foam bat, and anything else costume makers think will make a quick buck off rich kids in frat houses. There are also harvest festivals which are like Halloween but occur during the day; the pumpkins are not carved and are as huge and cumbersome as a fragile male ego, and people openly dance to repetitive banjo music instead of hiding their shame as God intended. Often there is wine, countless boxes of wine. Bring the kids and some Solo cups. (Bucket?)

No observation of Halloween is complete without mentioning the most divisive of confections: candy corn. Candy corn is neither candy nor corn. It is a soft, dense shock absorptive material made to line paratroopers’ pants in World War II. It didn’t work in the sense that the planes couldn’t get off the ground, so an aspiring entrepreneur bought all 823 million pounds of it and paid orphans up to three cents per week to paint it. Then he sold it to the same people who buy fruitcakes and it’s been in circulation ever since, like pennies but tougher and less useful. Sometimes children are crazy enough to eat some, and their parents negligent enough to let them. These children of course die instantly, and their panicked parents make up stories about apples with razor blades and candy full of cyanide to hide their shame.

Of course, the core of Halloween is trick or treating. Children of all ages put on fanciful costumes, pile into minivans, and either go to a daylight event called “trunk or treat” in a church parking lot that’s even more dull and soulless than it sounds, or go to the rich neighborhoods, because God forbid you interact with your own neighbors! That’s how rumors and episodes of “Seinfeld” get started. After a couple of hours of driving, the kids hopefully have a bag or two of candy, the good stuff like fun-sized peanut butter cups and straws full of tangy powder that is otherwise only used in underperforming rockets. After the kids have had a dozen or so they can interact with cosmic hyperfilaments on a quantum level and birth new universes elsewhere on the probability tree.

There are many things to be scared of in this world, and perhaps the ultimate appeal of a holiday like Halloween is that for one day, the scary things have a physical form and they’re something we can exert some control over. You can walk out of a scary movie. You can take off the monster mask. For the rest of the year, try to remember that the Earth is a tiny blue dot hurtling across an endless sky. There’s a lot of cold, black emptiness out there. But outside your window, out in the street, across the continents, in countless cities and towns all over, there are more people just as confused and scared as you, trying to live their lives in peace, trying to love and understand. We’re never alone, for we have each other. And the eternal candy corn. 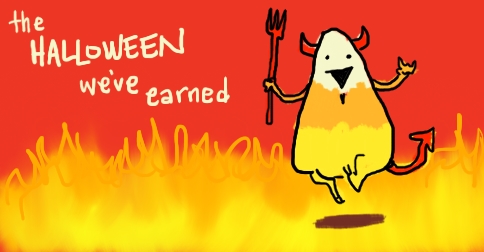