It’s Jack Chick’s birthday today, supposedly. I am not convinced he is still alive, but here we are. What a trooper. What a hard-working excellent model of what to do as a cartoonist, except for all the content. And any of his other ideas, aside from being a cartoonist. 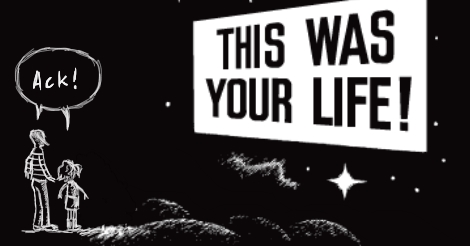 From his very first tract, A Demon’s Nightmare, Chick says that he knew his calling. He wanted to stump for God and Jesus and was great at drawing, and apparently at following through with things. Can you tell I’m impressed? It was about 1948. In any case, word is that he still makes the Chick Tracts, in spite of being 92 years old today.

His most famous tract is This Was Your Life. It’s pretty scary. They have now made a few variations of it. That’s right! Do you have ladyparts, because now there is a special version just for you, called You Have a Date. Scandalous, right? There are also African-American versions of many of the tracts, including the totally ridiculous and racist ones. Supposedly, they are drawn by a devout African-American lover of Chick Tracts. Poor guy.

This one about Jews, Love the Jewish People, is really surprisingly positive. I don’t think I’ve ever seen a positive one before this Sneerventure. Okay so it’s not positive in general, just about Israel. And then negative about everything else. Score one for the Jews.

Jack Chick is reclusive, possibly mythical. He has not given a public interview since the 70s. One of my favorite parts about the tracts, his website, and the catalog, is where it teaches you How to Witness. This is really just advice about how to give the Chick Tracts to strangers. But it also includes fun and exciting things to do such as: make it a competition on a vacation to leave them places; teach your child to give them out; send them to prisoners!

Honestly those all sound like great ideas. Gather your friends and some tracts and distribute them. Provide laughs for the people who will pick them up off the sidewalk and think, “Whoa, they still make these?” Also, this will be our method when we finally start pumping out Sneer Tracts.

Gold Fever appears to be the newest Chick Tract being offered. It’s pretty racist! But that doesn’t matter, because only Jesus can save you now.