Daryl Takahashi vs the Cats of Sneer Campaign 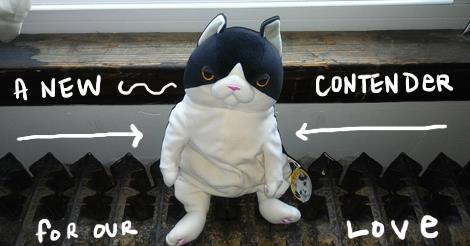 We have a brand new cat at Sneer HQ — one that we don’t have to feed! Daryl Takahashi is a cat who has been made famous by Hiromu Takahashi, Japanese Wrestling Superstar. He was sent to our home by our friend Zach, who knows what we like and knows how to give good gifts.

So he has moved in and made himself at home like the feline of confidence that he is. Mostly, he lives upstairs on the second floor, but he gets around from time to time. It was inevitable that Daryl would have to face off against each cat already living here, for that is the nature of cats. One must reign supreme in order for there to be peace in the house. 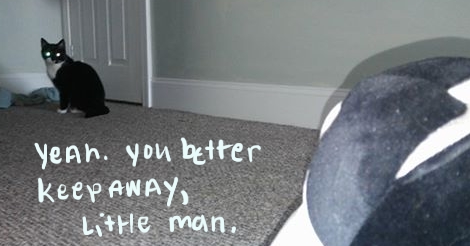 One cat is a fraidy cat, the other is a mighty cat. One cat wouldn’t even get near the camera, the other cat was born to be in front of the camera. Daryl won the battle with Tuff Ghost without even getting near him, his size and his warrior stare was enough to do the job. Tuff Ghost just knew to not even put up a fight. No one was surprised. 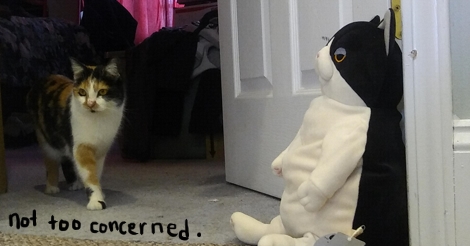 Custard “Wild Dog Gangster” Calypso Speedboat Remix Tuesday Calico Tough Guy seems to be largely unconcerned by Daryl’s presence. She is young and spry and from the mean streets of Covington, so she has a certain confidence around other cats that she doesn’t have with humans yet. She hides from strangers, mostly. But with Daryl, she sees him as nonthreatening. She’s lucky because Daryl would never hit a woman. He is a gentleman. 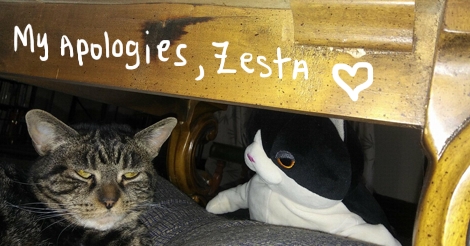 Zesta is the queen of the house. She doesn’t want to be around the other cats, and so it shall be. All she wants in life is to be able to nap wherever she pleases, which is usually on the giant cushion beneath the marble table in the front room. When Daryl made his presence known, she seemed to exude an attitude of wondering why she was being annoyed. So easily annoyed! Always! 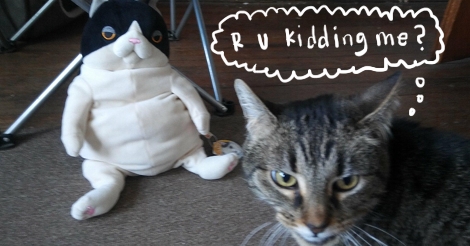 There’s a cat less-new than Daryl in the house but more-new than Custard, have we mentioned this yet? I know we haven’t but that’s what the next kitty comic is going to be about, fyi! She lives in the attic right now, which is better than it sounds. We call her Judy, after our ghost, and she is very strong and tough, having killed mice and even a whole squirrel! You can tell she has the easy confidence of a capable murderer based on how freely she ignored Daryl’s presence. Ouch. Too bad, Daryl.

Daryl vs. the Captain 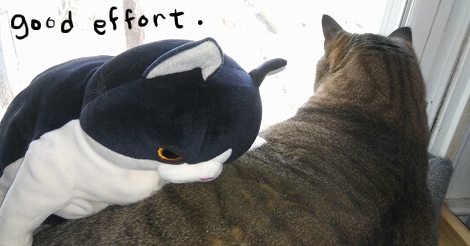 The Captain is a tugboat of a cat and was completely unfazed by this brutal attack that Daryl, frustrated by the haughty dismissals from the lady cats, delivered to him. I personally wailed in horror and dismay as Daryl hit the Captain with everything he had, all the moves he had learned from years of watching real professional wrestling up close and personal. But when I uncovered my eyes, I found that the Captain was still lying there, looking out of the window, seemingly unaware that he had been a victim of violence. He lay there like an immovable tabby island. Daryl slumped over him in exhausted defeat. 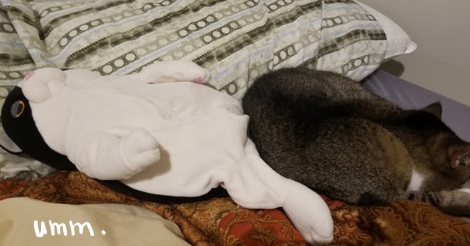 Luckily, Daryl has found love here in this house. He and Haircut are boyfriend-girlfriend and enjoy snuggling on Dollissa’s bed. It’s a little awkward for the rest of us, and now for you, too, but truluv is like that for the people who are near it but not experiencing it. So, best wishes to you two! May your love stay strong and true forever and ever, exceeding our jaded human expectations. Show us how it’s done! Show us how it’s done so we can put the results right here!!!