A lot of things happened this year… during you, 2016. Yes, I will go ahead and anthropomorphize you because that’s all the rage these days. I will talk to you as though you were a living entity filled with whims and aspirations, as though you decided who lived or died all year long. 2016, you are god, I guess, to a lot of people, but a form of god that they aren’t (entirely) frightened of being publicly angry at for things you have seemingly maliciously decided to do. How dare you be a living breathing creature of some type!? 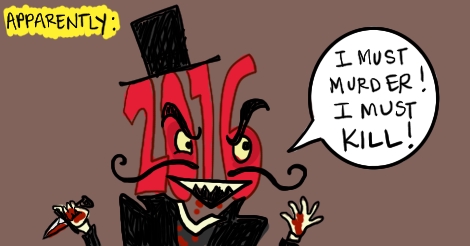 We can start off with the idea that you have deliberately killed off random famous people. You might not realize this, being a year and therefore I would imagine you are not familiar with the power of celebrity status, but celebrities are sacred and never to be touched, except privately and in our dreams. It doesn’t matter who it is that kicked the bucket, no matter how long it has been since they have tasted fame, there will be a collective outcry from wounded normal people who will scream that their childhoods have now died, for real this time.

This year has indeed seen the demise of icons, and it has been surprising sometimes because we forget that celebrities are mortal humans and not actually physically eternal. Other times it has not been at all surprising. But EVERY time, you have made darn sure that human beings ascribe human characteristics to you and have put the pieces together to determine that YOU are a serial killer. You, a year, are a mass murderer of the rich and famous, or the once rich and famous, or the faded and dusty and ancient but were living relics of a past form of fame. Good job, I guess!

2016, you are also going to go down in history as the year that actual important world events have happened and were black marks on our progress as a functioning society. There are still wars and terrible things! Who would have guessed? And the natural disasters! Even though most of them were barely covered by the news because the news is entirely broken right now, they still definitely happened and times were very hard for those non-famous victims. Maybe that’s why people weren’t as interested? Cycles are cycling, struggles are real, and it appears that nearly every person with an internet connection is loud and proud as they scream out their opinions on complicated situations which are probably impossible to know everything about − but that seems to not stop them!

Whether or not you will turn out to be the year that sets the stage for worldwide tragedy remains to be seen, but for what it’s worth, I bet that in a hundred years, none of this will be nearly as deserving as all of the hysteria that surrounds us every minute of every day. Maybe SOME frenzy is justified, but listen, if things are as bad as all that, everyone needs to calm down in order to actually DO something about it. How can anyone make logical decisions when they are so focused on predicting the worst and wringing their hands over speculations and crying in advance? The people love their frenzies and their dramas. In fact, I bet it’s part of why they are talking about you like you are a thing as they shake their tiny fists at the sky and wail. I guess I will get into that spirit as I break for my next paragraph. Rarr! Nooo! Whyyyy?

In my very detached and honest opinion, however, Year, you were pretty standard. This is not an insult, nor is it a complaint. It just seems to me that nothing is particularly different. People are always dying, and other people are always having public meltdowns. But maybe the difference is that I, personally, never noticed that people are so into having group fits, probably in an effort to bond with each other. Thanks, social media sites! We have gone back to the days of highly visible lamentations. Prepare yourself for the annoying trend of #rentshirt as people flood your feeds with pictures of them rending their shirts in overwrought anguish as pretty much anything happens, every day. Well, we might not be far off from public humiliation by way of putting people in stocks in public squares, so I suppose this return to Middle Ages mentality is just a really irritating and stupid inevitability. 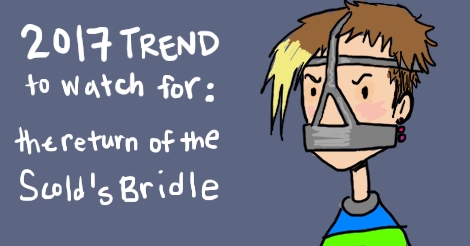 Personally, 2016, you have been good to me. I have met almost all of my resolutions set at the beginning of you, and I couldn’t have done it without ya, baybee. Actually, it was a fine year for us Sneerists, all told. There’s a Sneer HQ now, as you well know because we won’t shut up about it. Sneer 1 Imports is doing well, although obviously it will do better once we sit down one day and create a vision board about what it is we want, exactly, to accomplish. With all of this, really. We have traveled and adventured, listened to lots of great music, and survived as best we can. Haun‘s been ill though, which is certainly NOT good, and we have, each of us, suffered depressions and instabilities, except for Cchris and AlexT I guess. I can’t even begin to speculate why.

I’m going to miss you, 2016. It isn’t because I am overly fond of you, and I am genuinely looking forward to 2017 because I’ve always held an arbitrary preference for odd numbered years, but you weren’t as awful as everyone keeps saying. It’s unfair that they are blaming you for things that would have happened anyway. You aren’t cursed and I hope that they aren’t giving you low self esteem or any sort of rage that is building up inside. And, most of all, I hope that 2017 isn’t going to teach us all a lesson about picking on its sibling.