I didn’t really know much about Canadians − and I mean it’s not like I do now, before all of you proud Canadians hiss at me that I know NOTHING of Canada − until I was a tween and Kids in the Hall was aired in the late hours of the night on network television in the early 1990s. So, sooo long ago. I had been fed on a steady diet of entertainment from secret Canadians up until that point. They mask their pronunciation of “sorry” and are undetectable to us. Why are they hiding this? Would Americans be racist against them, if we knew? Well, that’s a subject for a crackpot theory article on another day, because I am here JUST to talk about one specific Kid in the Hall. 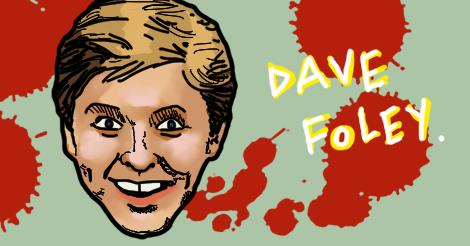 You brought levity to my young person life. You taught me that Canadians are talented, humorous, and shouldn’t keep their national identity secret. I liked your monologues the best, and really took the lesson to heart that humor doesn’t have to be dumbed down to be accessible to all. I don’t really know how you managed to do it, but it inspires me to this very day. Actually, I suspect that it was your delivery that made it acceptable to the masses.

You displayed the easy charm of someone who believed completely that they were very charming. That notion has influenced me too. Eavesdropping readers, remember to read my articles in a winsome, charismatic tone. You will like them better. You will have no choice. The bad doctor and the ax murderer were always my heroes, and you made a very pretty lady, frequently one who was very classy. Role model.

Dave Foley, since the days of Kids in the Hall, I haven’t always kept track of your goings on. I may have heard that there have been legal troubles, and dark rumors regarding this and that, but those things don’t matter to me! I have that special ability to compartmentalize a person based on their personal eras, and I want you to know that when I get my time machine working, I will be visiting you in the early ’90s. If you don’t remember such a thing happening right now, it is because the nature of time travel is complicated and depends upon infinite alternate timelines, so another Dave Foley out there will have the memories of me. And it might be a different me. But somewhere, somehow, right now, we are enjoying coffee together.

Here, I drew you a picture of us. When I pick you up in the time machine, we won’t stick around in 1993 because who would want to voluntarily do THAT? So here we are in 1926 heading out for some caffeinated night life, because I can only draw Art Deco themed drawings right now. 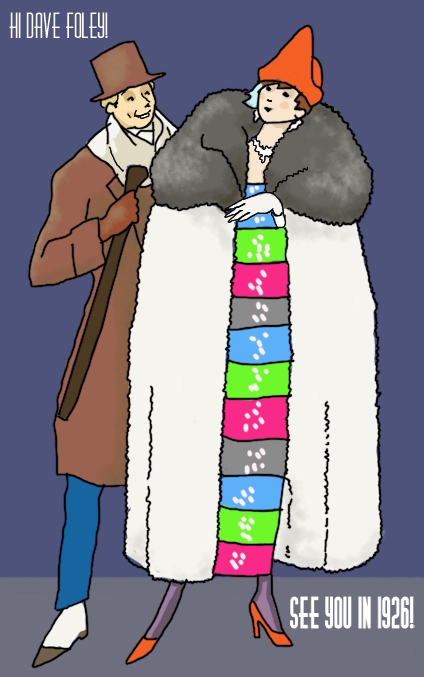