Marx Bros. for the Uninitiated

So here, friends, is an introduction to the Brothers Marx. These intros will not tell you much about the movie specifics, because you need to watch them. These movies are not about plot or character, they are about The Marx Brothers. 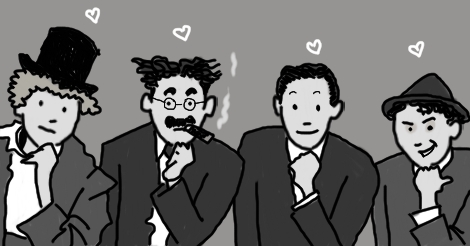 Since they made so many wonderful films, this is only part one of your introduction for the uninitiated. We will look at the Marx Brothers in general, and their first five feature films. I have even included clips from most of them!

First of all, yes, they are brothers. And there are actually five of them, although only four were in the movies, and only three were amazing. Those brothers, at birth, were named Leonard, Adolph, Julius Henry, Milton, and Herbert Manfred. Great names, right? Well they didn’t use them, obviously. Those little Jewish boys soon became, at the behest of their mother Minnie Marx, Chico, Harpo, Groucho, Gummo, and Zeppo. We’re pretty much not going to mention Gummo again.

In their childhood, Groucho, Chico, and Harpo learned to play instruments very well, especially Harpo who played at least six, including harp of course! Zeppo became a vocalist. They did start out primarily as singers, then moving on to vaudeville and stage shows. They are the greatest family of comedians that has ever lived.

The Marx Brothers personas are legendary. They are the whole shebang. There is some discussion as to how some of them actually got their nicknames, but the important part is what they did with them.

Groucho, the main brother, is always the star. He is loud, outrageous, and strange. His signature look is his glasses, mustache, and cigar. You can still find Groucho masks at silly comedy stores! He employs a lot of one-liners, especially sort of sleazy ones. He chases after every woman he sees.

Chico (pronounced chick-o) is the horndog, or “chicken-chaser.” Generally he plays the character of a con-artist, and usually alongside Harpo. His persona is seemingly Italian, judging by his pretty racist accent and his very ethnic names. He’s always got that hat on. He chases after every woman he sees.

Harpo is the silent one. You won’t hear him speak! Often he is totally quiet, although sometimes he employs a horn and honks at people. He’s always got on a gigantic coat, from which he can pull various items for comedic effect. My favorite bit of his, is when he makes people hold his leg. I swear it’s funny. He chases after every woman he sees.

Zeppo is the straight man. He is a beautiful singer and often is the character that is actually trying to get the girl in a reasonable way. He dresses like a normal person and usually has a normal name. Poor, boring Zeppo is actually still amazing.

The Cocoanuts and Animal Crackers

The very first Marx Brothers movies made were both based on plays. The music in The Cocoanuts was composed by Irving Berlin, which is great. Groucho stars as Mr. Hammer, Chico and Harpo star as Chico and Harpo. The movie’s plot revolves around a hotel, but the point of the movie is those fine young gentlemen.

In Animal Crackers, Groucho stars as Captain Jeffrey T. Spaulding. A party is being thrown in his honor, when an expensive painting goes missing. Harpo stars as The Professor while Chico stars as Signor Emanuel Ravelli. Hilarity ensues.

This film was their first to not be based on a stage play. In Monkey Business, the brothers sneak onto a ship as stowaways. Wacky hijinks ensue! They have no names and are only referred to as The Stowaways. Trapped on a ship is pretty much the perfect setting for them to run amok. Also, you can hear Harpo’s voice in this one, for about 3 seconds.

This amazing movie landed the brothers on the cover of Time magazine. Horse Feathers is about collegiate football and the crazy things that athletic departments (still) do to pump up their teams. It’s a sort of scathing commentary, but also hilarious, because who cares about football? Also, you get to learn what a college widow is. Scandal. Groucho plays Professor Quincy Adams Wagstaff, while Zeppo plays his son, Frank Wagstaff. Chico and Harpo play Baravelli and Pinky, two bootleggers who later join the football team.

Duck Soup is the most critically acclaimed movie that they made. It is also their last film that included poor Zeppo. In this movie, the country of Freedonia is going bankrupt. For no reason, Groucho Marx as Rufus T. Firefly is appointed as the country’s leader. An aggressive neighboring country, Sylvania, sends in two spies to try to oust Firefly. Of course, those spies are Chico and Harpo, as Chicolini and Pinky (a different Pinky, I guess). Zeppo plays Firefly’s secretary. The film was banned in Italy, and residents of Fredonia, NY, protested the similarity of Freedonia to their town’s name.