Difficult People: Difficult Not to Love

If you haven’t seen this year’s best new show, and Hulu’s very first actually good original show, go to Hulu right now and start watching Difficult People. The show has 8 episodes so far, as of this post. It is already renewed for a second season, because all is right in the world. However, today’s post is this season’s finale. Here’s to Difficult People! 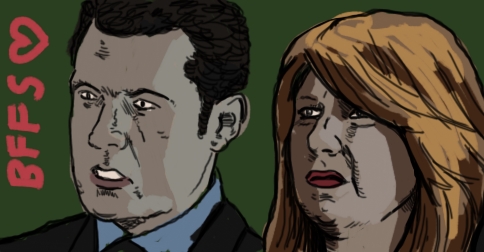 The show stars Billy Eichner as Billy Epstein and Julie Klausner as Julie Kessler. They talk about pop culture and are fiercely loyal to one another, as friends should do and be. It seems like nothing in the world is more important to them than posting online and hanging out with each other. Billy Eichner is one of my favorite comedians. I love everything about him. When the show was first announced, I was pretty much already obsessed. Julie Klausner is not someone I had previously known about, but now I love her too.

I read reviews of the show saying that the way they spout pop culture jokes and trivia and banter about how much they hate everyone and everything is very specific to certain people. Those reviews said that the success of the show hinges on whether that will appeal to a broader audience. Well luckily we are exactly that audience. Thank you Amy Poehler (producer) for another fantastic comedy.

Nate and Denise, the café owners (where Billy works), and Matthew, Denise’s adorable tiny gay friend (who reminds me of some of my particularly effeminate and sassy friends, sorry dudes) round out the characters excellently. While the show focuses mostly on Billy and Julie, these guys have some really stellar scenes.

When I watched the first episode, I was hooked. That Blue Ivy joke may have been crude, but I laughed so hard I thought the other episodes couldn’t possibly compare. I was wrong.

The highlight of the show, for me, is Arthur Tack, Julie’s boyfriend. Complacent, charming, and endearing, probably in not the usual ways, he strikes me as the perfect partner. He is supportive of her crazy ideas in that he will accompany her, at the very least. He is nice enough to never put her ideas down, but still gets in some jabs about her more common silliness. He does his own thing, knowing that he and Julie are separate people, with separate interests, who still really like each other.

Bonus: Arthur Tack is played by James Urbaniak, one of the best New Jerseyans (and people) in the whole wide world.

And, for my favorite joke so far, Billy, on why he doesn’t know how to use power tools:

“Because my father is dead. And when he was alive, he was Jewish.”