Difficult People is Back, to Warm Your Cold, Cold Heart

One of the best television shows just came back for Season 2 last night, and if you don’t have an ancient tv set and missed it, don’t worry! It is The Internet Age and Difficult People can only be seen on Hulu. (If you don’t have Hulu, just figure it out. It’s important!)

The overlords at Hulu were kind enough to release two episodes to us at once, to satisfy our bingeing and masturbatory needs. Right off the bat, the first episode satisfies. A mere 2 minutes in, there are references to both Anne Hathaway and the Holocaust. And thus begins our Difficult Journey. 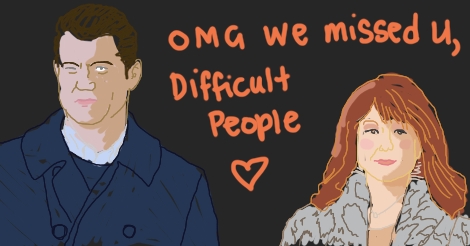 Julie is a standout in the first episode. Trust me, I love Billy Eichner so much that it hurts, but Julie really takes the show. The plot revolves around her trying to impress Jewish television writers. Ripe for comedy! While Julie tries her best to prove her cultural Jewish-ness, Billy tries to find a gym in New York City where he hasn’t already hooked up with someone.

While Julie does her best to be a Jew, which is a pretty terrible attempt, Arthur agrees to be her Sabbath Goy. If you don’t know what that is, here’s a little edutainment for you:

On the Sabbath, us Jews aren’t supposed to do anything. I’m not that sort of Jew, and neither is Julie, but it’s a day of rest for the others. You can’t turn lights on or off, you can’t drive a car, you can’t even rip toilet paper! It’s kind of hard to live that way though, even once a week. So, some Jews get the help of a goy, a non-Jew, to do some of those things for you, because hey they are not a Chosen One anyway. Go ahead and rip that toilet paper, ya gentile!

You’ll have to watch the show to see how it turns out. Here’s a spoiler: terribly.