Habbo Hotel has done it. It has trapped our favorite Sneerists in its greasy claws. They were able to sneak some letters to the mail room to update us on their dire situation. Will the obsession ever end? Probably. Everything ends eventually. But until then, there will be…. 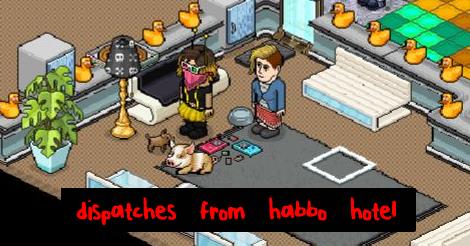 We’ve lost Cchris to the army. The Habbo Army recruited him on his second day, along with Zach. Cchris still talks to us, but briefly, superficially. He spends most of his time at the desk, recruiting other young Habbos for this endless war. He’s supposed to be paid, I think, but not for some time.

He’s changed a lot. I see him sometimes out of his fatigues at home, arguing with Amandoll about his commitment, pacing the room angrily. Frustration becomes him.

Zach resigned publicly a few days ago. I followed him to the recruitment office where he started to shout. I missed the rest. He explained his reasons, listed victims. By the time he was booted from the office, another recruit agreed with him. When he left, the armed forces were shaken, questioning.

We thought we might start a punk band. As usual, the band part didn’t happen. We built a mostly empty warehouse to hang out in. We paid for broken windows and haphazard furniture. We pooled our purple duckets and our coins to get a van.

Amandoll waits at home for Cchris. She does her hair and trains her pet pig, Chris. (He learned to jump on command today.) Her room is neatly decorated, cheap. She sulks, waits in bed, sighs. Cchris is too often at work.

I have to go, we’re redecorating. 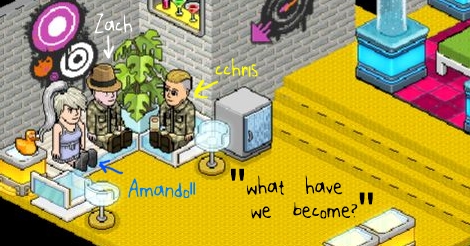 Today we attended a wrestling match. It was genuinely entertaining, and one of the most exciting Habbo experiences I’ve had in my short Habbo life. The match between Cyanide and Wraith went on for a bit. Long enough for us to choose sides and to figure out what was going on.

We watched as they announced moves and attempts, with referee decisions and interventions. Zach was offered a wrestling position, which he declined. We watched someone else ask to wrestle during the match. He was told he’d have to sign up, train, and wait a full week. Pretty intense.

When the match ended, we all went back to the warehouse. Still no band, but we got a microphone and a campfire. 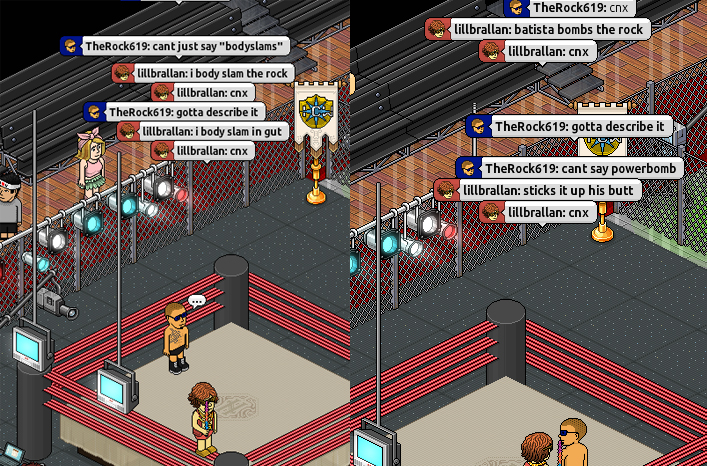 We came into a lot of Habbo money. How it happened was all a blur. We started to win furni. Then suddenly we were rich with duckets and coins. After a few radio contests, we went shopping-crazy to decorate our warehouse. We bought a herd of animals, sending them to each other for breeding, making a new, smaller herd of them.

The rhino, several pigs and cats, and two horses have made their homes in a second warehouse we built, also with our riches. They spend the day eating all our duckets away and learning mainly pointless tricks, like “speak.” We can ride the horses but they hate it. The pigs are depressed and have nightmares all day. The cats run around laughing. 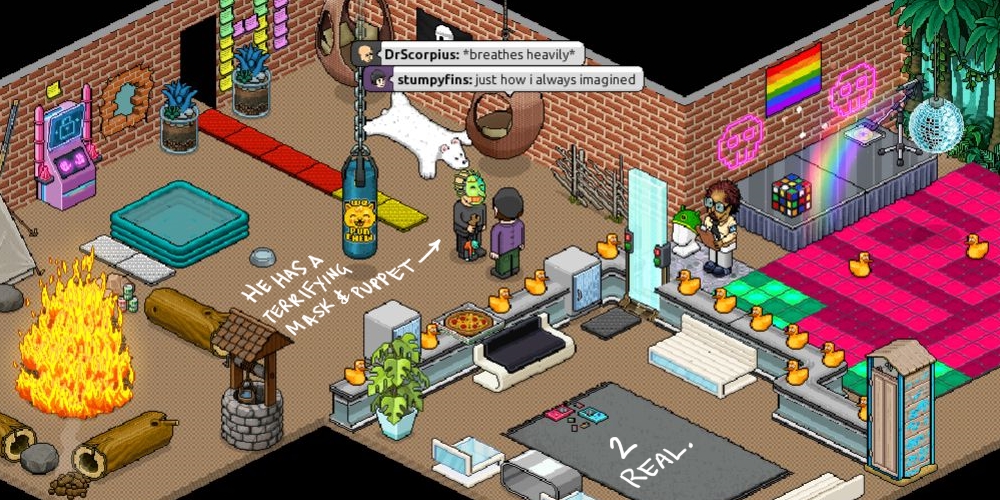 We made a mistake. Cchris came back from an army stint, fresh from recruiting new, young people in need of some money. He passed a shop on the way and bought a Love Lock. He didn’t know what it did, he claimed. Just stand next to it, he instructed. 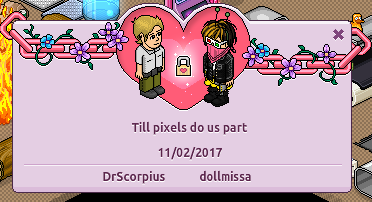 I got a job in Habbo Hotel. I figured it was time for me to stop loafing around shouting at a piglet to sit down. I walked right into the White House and asked for a job. After following several instructions, changing into an approved outfit, and ditching my anarchist bandanna for the last time, I walked into the staff area.

I went through multiple trainings and moved up the ranks several times in the first two days. Cchris came to visit after my first promotion and sat down with me. I attempted to recruit him, but neither of us would budge. Eventually he was asked to leave and I recruited three other unsuspecting individuals into the complicated power structure that is probably resting atop a foundation of child labor. Somehow.

I was told that I can come and go as I please. There are no work hours or requirements yet. I usually pop in to receive a compliment, dance next to the Vice President, and then go home to our warehouse. 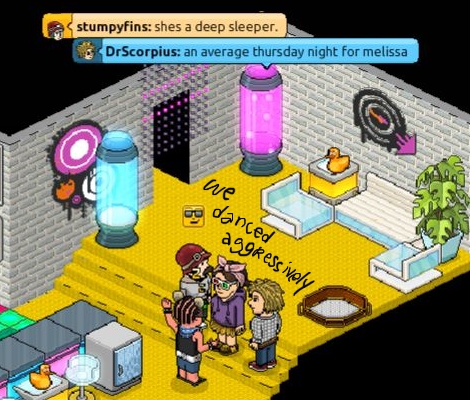 We are not coming back. Tell our parents that we love them.