Do NOT Touch Paper Money 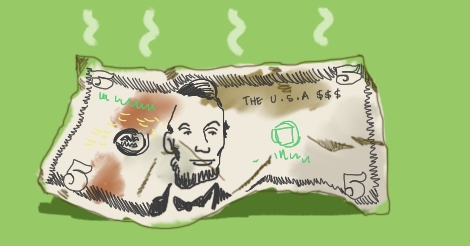 After over two decades of experience and exhaustive research, I have concluded that no one should ever touch paper money. Not you, not me, definitely not your children or other loved ones. Not ever, and not even a little bit. Maybe you can let your pets handle your cash, but remember that that’s the same creature that eats its own poops and greets others by sticking its entire face in their assholes.

Why is it that something so coveted by everyone should be so detestable? Why? WHY?! Calm down, psycho, you don’t have to yell. I’ll tell you.

I don’t consider myself a connoisseur of men’s restrooms, but I’ve been to enough of them to know what’s going on. What’s going on is a lack of hand-washing. I’m not saying nobody ever washes their hands in a men’s restroom, but if someone thinks no one is looking, eight or nine times out of ten, they’ll just finish their business and walk out. These aren’t junkies or hobos. These are everyday people who just touched their junk and their butts, fail to wash their hands, and then reach into their wallets. What compels someone to smear their germ-infested hands on what amounts to an absorbent scrap of paper escapes me. All I’m sure of is that when I see George Washington’s face on the dollar bill, I’m wondering how many people have smeared some rogue fecal matter across his face. That’s not just gross, it’s downright unpatriotic.

Bathrooms might even be the least of our concerns. At least a few people actually do take a second or two at those sinks. Out in the rest of the world, it’s a different story. People are sneezing and coughing into their hands, smearing the drool and food off of their lips, rubbing the crusty bits from their eyes, picking off their scabs, scratching themselves in every imaginable place (and several unimaginable ones), and any number of other activities involving their own hands and the various fluids and pastes their body produces.

Now, when some mom wipes the snotty nose of her child with her hand, do you see her wash it before she pays for her anxiety medication? When some creep picks his nose on line for a movie, is he running to a sink before he buys his ticket to How to Train Your Dragon 3-D? They might actually wash their hands before cooking for their family, but those substances are on the money to stay.

One of my roommates was a male stripper, and I’ll admit I am still jealous. He made a bunch of money, and had fun doing it. If I had a hot body, the ability to dance half-decently, and the physical stamina to shake my ass at a club packed with hyper-sexual gay men for four straight hours (or not-so-straight ones), of course I would do it. Sadly, I have none of these qualities, so I must leave the job title of “Man Candy” to the more endowed and skilled.

However, having been the roommate of one such blessed individual has afforded me the opportunity to see exactly the state in which he received his hard-earned tips. When my roommate came home from a long night of gyrating and hip thrusting, he removed what appeared to be half of the output of the US Mint for the calendar year from a Speedo the size of an after dinner mint. This by itself would be fascinating on its own, but the mystery only continued. It was shocking to see every bill on the east coast ejected from this man’s crotch, but then it was revealed that all of the bills come out balled into wrinkly, smelly, and worst of all, sopping wet wads. 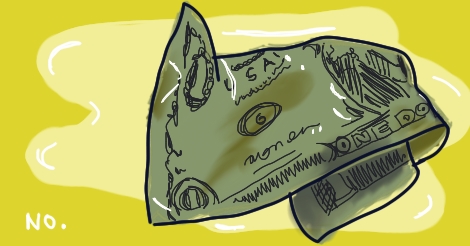 Please don’t imagine that my use of “sopping wet” is at all an exaggeration. If I meant moist, damp, or even slightly wet, trust that I would have used those words. These bills that my former roommate brought home were soaked through with God-knows-what liquid, with plenty left over to drip. And drip it did.

How the money got this saturated with fluid is beyond my comprehension. Maybe he went for a quick swim after work to cool off; he was wearing what amounted to an extra tight swimsuit. I guess it would also have to not occur to him to remove his duffel bag’s worth of ones from the nooks and crannies of his nethers before diving in for this theory to hold water (bad dum tsh). While this might be a stretch, I don’t want to imagine the all-too-likely alternatives as to why my roommate’s share of the rent made a formidable puddle on our living room floor.

“How does this affect me?” you might be asking, as if you weren’t getting ready to be told anyway. That money doesn’t just curl up there, weeping various liquids into the hardwood floor. That money gets spent. It’s not like this guy went to the bank, deposited all of his soaking crotch money into an account, and got some clean crisp twenties for later, followed promptly by their incineration. I know we’d all like to imagine it that way, but sometimes life doesn’t play out the way you hope it does.

After being laid out on his dresser for a couple of days to dry out, those singles were how he paid for rent, groceries, coffee, and just about any other expense he might incur during the course of his day. “Why waste a trip to the bank?” I imagine him thinking, “It’s perfectly good money.” This is a matter of convenience for him, but it’s bad news for me and you, and the headline is “we’re probably going to be touching some of those bills.” What do you think we’ll be getting as change at those same coffee shops and grocery stores that he went to?

It’s not like it’s just him either. There are quite literally thousands of people doing this every night, and circulating this money back into stores and other places of business. Does your job involve taking money from customers? Do you buy things at a store and get change? Have you ever held any paper money ever? Just about all of those bills have been in somebody’s crotch in the past week, probably several dozen over the life of the bill.

Not just an urban legend anymore! In case there was a doubt in your mind, I have witnessed people snorting cocaine through twenty-dollar bills on enough occasions to be statistically significant. Observer bias, you cry? Well, you are both a statistics nerd and also WRONG! I pride myself on the rigor of my research for internet articles, especially ones meant to sicken the reader. People will tell you that these are just the kind of bills that get spent on cocaine, and you don’t need to worry about this practice unless you’re a drug dealer or something. That is faulty logic born of wishful thinking. Here’s a quick reality bomb: if those bills were spent on the cocaine, how does that person still have it once they have the cocaine to snort? That’s just lack of thinking it through. While there isn’t any evidence that touching money will get you addicted to drugs, I’m certainly not taking the chance. I may like taking risks, but the risk of becoming a crackhead is a little too great to waste on merely touching bits of paper. Paranoid, am I? Overly concerned? Fine, then, you use it. You use the money smeared with illegal drugs and let it soak into your skin. Go ahead, touch it.

If you’re really concerned about this one, and want to avoid these bills at all costs, then I should let you know that this practice is restricted almost exclusively to twenties in my experience. Why? Maybe it just seems ritzier to do drugs through a larger bill, and skeevier to do it through smaller ones. If that’s the case, I have to think billionaires do their drugs through ten thousand dollar bills. (Bonus trivia: the $10,000 bears the image of Salmon P. Chase, sixth Chief Justice of the Supreme Court. Take THAT Roger B. Taney, fifth Chief Justice of the Supreme Court.)

You may think I’m just bullshitting you, and I applaud you for your skepticism. On the other hand, shut the hell up, and science agrees with me. Real scientists, with degrees and everything, published in peer-reviewed journals, have done repeated studies on money filth, and the results are more sickening than the entire rest of this article. Bills have been found to contain staph infection, pneumonia, seasonal flu, bird flu, swine flu, even food poisoning. Over two-thirds of bills were found to have enough bacteria on them to infect a human, some with over a hundred different diseases. Is someone playing a prank on us? This sounds like a terrorist plot. These pieces of paper that everyone touches on a daily basis are covered, more often than not, in crippling and occasionally deadly germs. Bin Laden himself never came up with anything so diabolical. 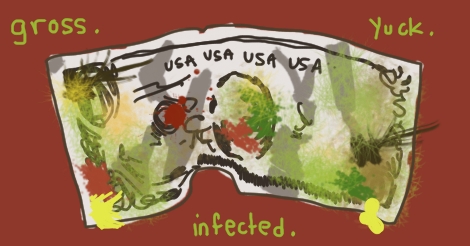 If you’ve read this far without retching up your organs through your mouth, you have a stronger stomach than I do. I hope this encourages all of you readers to lay off of cash for good. If it doesn’t, if you just laugh it off and go about your day, if you think, “Oh it’s just a satire!” and you keep exchanging bills with every stranger behind a cash register you see… then you, sir or madam, are exactly the reason that I no longer can see dollar bills without projectile vomiting directly onto whoever is holding them. Just remember that next time you pull out your wallet, and every other time forever. In case you forget, I might just be there to remind you. By throwing up onto you. You’re welcome.