In 1941 on this day, Dr. Demento was born as Barret Eugene Hansen. A grace was bestowed unto this world, destined for top hats, wacky radio shows, and, like many weirdos, a love of trains.

Turns out he isn’t just wacky, he’s also an ethnomusicologist and a music writer. He studied ethnomusicology at University, but also folklore, which probably makes him just about the best storyteller there can be. He brought to many of us access to some weird nonsense to listen to, in case regular music wasn’t quite mindless enough. 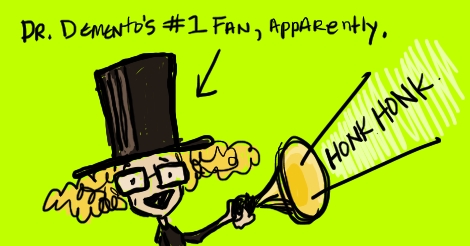 Dr. Demento brought this love of weirdness to all of us, while keeping his signature top hat on. And he sure knows a lot about music and comedy music! Apparently his radio show eventually moved to streaming online, while the “terrestrial” radio show ended. At this point, he hosted a show for over 40 years, in some form or another. Without the hat, he could be anyone’s eccentric older friend or uncle, with the record collection and everything. He’s basically engaged in what one of my former professors might call a multi-decade research project, or what I would call a hilarious career.

Dr. Demento’s radio show was something that I valued as a tween. I went from my Weird Al phase and took a not unrelated but unpredictable left turn into The Dr. Demento Show.

I would buy CD collections of it from big CD stores like Tower Records and Virgin Records. I’d ride escalators up and down while I decided which collection to buy, usually. I’d listen to such hits as “The Cockroach that Ate Cincinnati“, “Fish Heads“, and “Poisoning Pigeons in the Park” for hours at a time, sitting on  my bedroom floor with my portable CD player (with extra skip protection) in my lap. I’d treasure such artists as Tom Lehrer, Frank Zappa, Ogden Edsl, and Benny Bell.

The real highlight (of my youth?) was joining The Demento Society. I sent them some money, who knows how much, and they mailed back a practically random assortment of Demento swag. I was sent a membership card that I could sign (made of paper), a members-only Dr. Demento’s Basement Tapes compilation, a 10-inch ruler, a signed headshot, and some more garbage that is hopefully lost to time. 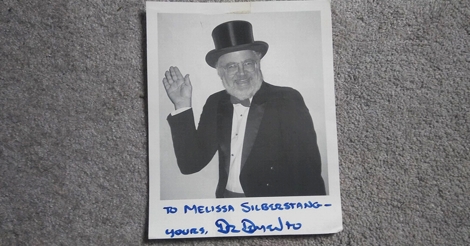 Not this signed picture though. I am probably going to have this framed and placed prominently in Sneer Headquarters. Happy birthday, Dr. Demento! You are a hero to all of us aspiring gigantic kooks.