Image is important. Even the least vain of us, those of us who tend to use a calendar to schedule our bathings or have hair in matted wads sufficient enough to put a baboon to shame care something about how we present ourselves to the world. We all have a touch of Narcissus in us. We all dress and groom ourselves to the end of presenting a specific image to those we meet. From the executive in the three-piece suit to the white kid dressing like 50 Cent to the obese redneck Neanderthal in a wife-beater three sizes too small, we all decide what to wear.

Now, why wax rhetoric on something so blindingly obvious? Well, mainly because it got a paragraph out of the way, but also to build up to my point, which is that few people dress the way they do by accident. And those that do, through some bizarre chain of cause-and-effect beyond my intellectual grasp, manage to get dressed by accident rarely manage to find their way outdoors. So, really, for all intents and purposes, we all deliberately dress the way we do.

But why? This is a question that has stumped philosophers for untold millenia. However, it pays to bear in mind here that questions such as “Are we real,” “Where do babies REALLY come from” and “if a tree falls in the forest and there’s no one around, does it mean six more weeks of winter” have also stumped philosophers for untold millenia. This is mainly due to philosophers quickly realizing that coming to conclusions about things was a sure way to think themselves out of business and force them to get real jobs, possibly involving goats. So as we can see, even philosophers were aware of the importance of presenting a good image. 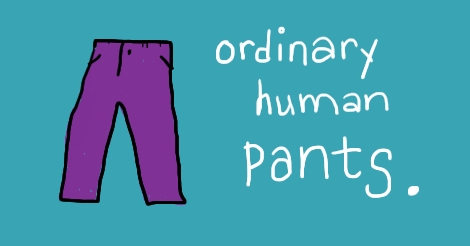 This all failed to cross my mind one evening, once upon a time, when the duties of my day job found me in a dentist’s office, surrounded by many young attractive dental hygienists. Now, before you clap me on the back and say something sophisticated, sensitive and enlightened, something such as “you DOG, you,” let me point out that when you’re in a dental office as something other than a patient, and find yourself interacting with a young, attractive dental hygienist in a social manner, the first thing on your mind is not flirting. The first thing on your mind is what she sees when you open your mouth. Sure, on the surface you’re making a pithy comment about a passing station wagon, but inside you’re wondering if she’s mentally comparing your teeth to all the others she sees in the course of a day, and is secretly revolted by the fact that you don’t floss as often as you should. Or, technically, at all. Never mind that no one else can tell. She’s a professional. She KNOWS.

However, my inadequate oral hygiene habits were soon to be the least of my concerns. You see, as I stood on ladders and carried boxes and laid under dental chairs to pull cable, something awful was happening. An unseen menace was preparing to strike. And so it was that as soon as I had managed to get over my dental insecurities to get to flirting, as soon as I felt confident and in charge, that was the time that my pants felt compelled to, well, explode. 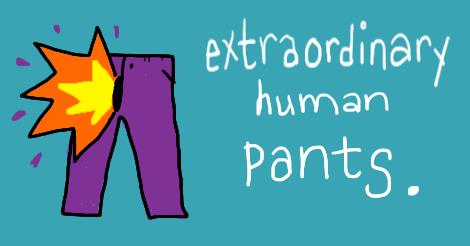 Technically, they did not really explode per se. Most kinds of pants are relatively slow to combustion nowadays, with only a few varieties of “Dockers” prone to detonation. No, what happened here was that as I ascended a ladder, the inseam of my seemingly perfectly normal pants blew out like a worn out truck tire. Now, in a situation such as that, one’s options are limited. I for one seldom feel compelled to keep emergency pants at the ready. All I had was several toolboxes and a roll of electrical tape. My options were thus:

So, all in all, I managed to keep my image intact, except for the part when I discovered three inches of electrical tape hanging out of my new second fly. The moral of the story? The next time you find yourself in a situation where you wore the wrong bling or finding yourself at a party and someone has the exact same mullet as you, just remember: AT LEAST YOUR PANTS DIDN’T EXPLODE!