Marketing has always had a pronounced gender divide. Look at an ad for, say, laundry detergent; You never see Dad sorting the whites and colors, it’s always Mom doing the chores while Dad sits on the couch trying to lick the last of the cheese dip from the bottom of the jar. To market to men, all you need is a mixture of diamondplate, sports, and aggression. Marketing both builds and reinforces gender stereotypes. Live up to the standard of masculinity or lose your “man card.” Masculinity is very fragile, and can go away at any moment if you can’t name at least three starting quarterbacks for the NFL. It’s stupid, demeaning, ugly, and it’s time I cashed in.

Fidget spinners are all the rage right now. Originally invented as an aid for children and adults with conditions like anxiety and ADHD, it’s now caught on in the mainstream, so now it’s dismissed as a toy so the people who need them look foolish for taking advantage of them. Once again, it’s time to cash in. Every product, from hygiene to TV dinners, has a version “FOR MEN,” and it’s time fidget spinners caught up. This fad has a shelf life, after all. So now, in the interests of cashing in on fads and upholding the masculine standard, Sneer Campaign presents FIDGET TOYS FOR MEN. 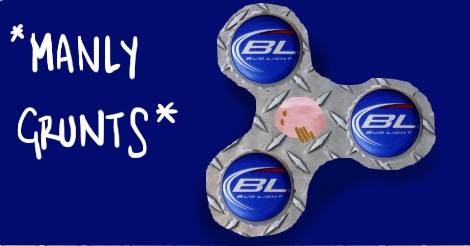 First we have the classic spinner. Your kid is chasing the cat with one right now. But Dad can’t use it, because it’s pink! The Fidget Spinner for Men is made of pure diamondplate, roughened with a file to help build manly callouses. The center hub is cut from a retired patio grill, fresh from being used to sear juices into meat. The weights are topped with Bud Lite beer caps.

Next we have the fidget cube, an adorable little device with switches and buttons and the like. Made for the small dainty hands of women and children. Time to MAN IT UP. The masculine version is a foot on a side and weighs forty-two pounds. Each side has a different manly fidget. One is a rotating dumbbell handle. Another is a bolt action from a rifle. Next is the laces from a football. Then a bra clasp. Rounding out the cube is a whiskey tumbler with simulated ice cubes you can swish around, and a rubber face of a lesser man to punch. This is sure to laminate your Man Card.

Finally we have the dark horse of fidget toys, the Fidget Putty. Remember Gak from several years ago? Same idea, made for special needs kids to keep their fingers busy. Mom has biscuit dough to knead, but what about poor Dad? Never fear. Manpaste is made for the discriminating fidgeting male. So thick and rigid it will only yield to the most powerful hands, it’s a one foot square cube of the most abrasive pumice stone. Specially treated with the congealed blood from the heart of a buck, black powder, and steak sauce. You don’t knead or caress it. You grab it powerfully and DOMINATE it. Comes with gunmetal carry tin. 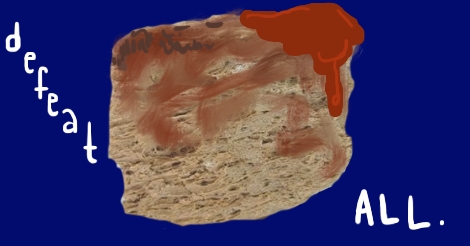