If you’re like me, then you have a raging torrent of thoughts and images that run through your mind without an end. I wouldn’t go so far as to say that I have an attention deficiency disease, it is more like an imagination overload blessing-curse. If I don’t have anything to do, it provides a decent amount of entertainment and serves me decently when I have to brainstorm, but if I have to concentrate on a single task, well: lol. 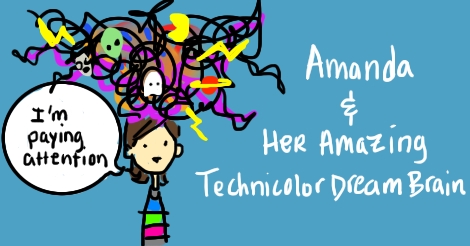 Well, I am back in that Productivity Saddle again, astride my Functional Human Pony wait no that sounds unsettling and terrifying. There are no short little centaurs in what I am saying, but I mean that I have to sit down and shut up and cater to deadlines for paid work. This can be difficult because I have so much other stuff that I also need to do!

Normally, I would advocate that creative procrastination could help me (eventually) finish the jobs, but I think it is time to change tactics, even though “writing an article for this site instead of working on real work” is actually listed in that article of great advice. Right after I post this, I am going to be doing THESE suggestions! And so should you.

I said it before, but I’ll say it again: in order to concentrate, it helps to have clean setting. In some ways, a mess is fine, if you are sculpting or creating — but you usually do know exactly where the tools are that you need. What I mean is just keep your home tidy. Yes I am becoming my mother, but she was onto something after all. If you don’t you give your frustrated monkey mind the opportunity to become annoyed and want to clean up crumbs or dirty dishes instead, then that is one less obstacle to have to conquer. Eventually, you cannot work at all because the sudden need to be clean for once in your life becomes too much. Start out with orderliness and go from there.

As sort of a side effect of the yoga that I have challenged myself to do this year, there is a desire to “meditate.” Those of you who are uninitiated might scoff, and I was once like you. However, meditation becomes easy over time. As I exercise and stretch, I just more or less stop thinking, and when I notice that I am thinking, I just stop again. It seems to work and it gives me a break from the incessant slide show of pictures and that strange cacophony that is going on in my head that is like having seven television sets playing at the same time, plus three radios. These short breaks seems to strengthen my ability to focus on single tasks later, somehow. It didn’t happen overnight though. This is something I have noticed after months of not expecting any results. Possibly insidious! But so far, so very good. 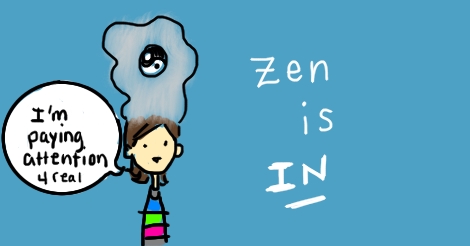 I have discovered this time budgeting method that probably everybody else has known about for decades and it has been working for me. Maybe it is just because this is the only method I have ever tried in my life, but I’m not going to figure that out yet. I guess basically you set a timer for 25 minutes so that you can work. After that increment of time is up, you take a five or six minute break, and then do it again. You do that 25 minute cycle four times, and then have a 30 minute break. Then do it all over again. Originally, I figured that having such a short work time would mess up my flow. I always thought that keeping myself in the go go go zone until I burned out on it in a spectacular fashion was the way to success and ultimate glory. Burn out, keep going until my work has become so shoddy that I’m sickened and stop, and then have to go back and correct errors the next day. Not anymore! These short segments enable me to stay fresh, and also, I can switch between my many projects, so now more of the things I have to do are becoming noticeably more and more did! Amazing! Who am I?

Kevin introduced me to a site called mynoise.net and it is very handy. I have been using it in combination with everything I have just listed and I firmly believe that it is making all of those things even more effective! As we all know, ambient YouTubes are great, but they are now the way of the past. MyNoise has a wide selection of sounds, and the best part is that you can fiddle with the little slider soundboard things, or have it do it automatically so that nothing ever becomes repetitious. And like, say you want to hear a million frogs, but you don’t want to hear someone’s canoe paddle on the water — you can mute that channel. Want to have a siesta in a Berber tent and hear sleep breathing but not a full snore? Done. Do you want there to be kitchen sounds or not? It is up to you. I spent a very important five bucks to gain access to the full library and I don’t regret a thing. It is additionally helpful because I use the timer and zone out, granting me a lot more focus that I didn’t know I was capable of. 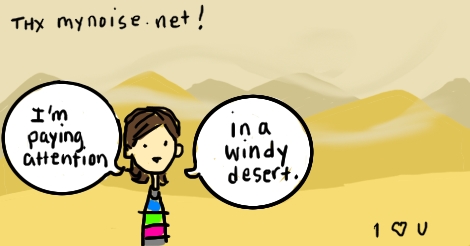 I’m also keeping lists. For the first time I feel like I have a surmountable level of work because I haven’t taken on any new projects unless I finish some already on the list. The system works, who knew. I’m not drowning under tasks, but it doesn’t seem like it’s because I have fewer. Was it an unexpected attitude adjustment? Is this all I needed to do my whole adult life? Hilarious.