Get Out of My House, Stranger Things

Growing up, I was incredibly afraid of scary movies or tv shows. I couldn’t even hear the theme music to X-Files, which my dad loved, before running from the room, sometimes crying. I must have accidentally seen the opening scene once or twice for the theme music to scare me. There is one I remember pretty vividly terrifying me as a kid, but as an adult lover of X-Files… man that episode was so barely scary!

In any case, I have grown less and less sort of generally afraid of these things, and more able to enjoy watching them. And then, of course, turning on some lights before bed.

However, there are a few things that I still can’t handle. One is of course the A-word, and the other, well, it’s home-monsters. 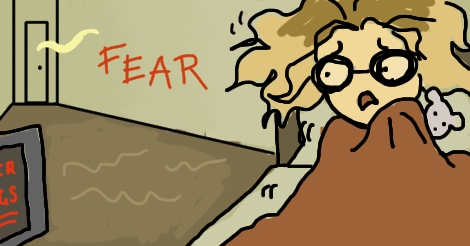 There are a lot of places that are just naturally terrifying in the world. Not just exact locations, but things like abandoned hospitals, forests, dark and winding roads, damp graveyards at night, an ex’s pickup truck on the precipice of a cliff…

But there’s something that always feels safe about being at home, in your own home. It’s comforting, warm (presumably), familiar. Plus, it’s your own stuff, you know the layout in case you need to run or hide, strangers hopefully can’t wander right in, and you might have roommates, such as pets or friends, to hear what’s going on in case of an emergency.

In the hit new Netflix show, Stranger Things, the bad guy scared my pants off. The Demogorgon, as it’s referred to by the kids, doesn’t just come through walls to get you… it comes from within the walls. Presumably it could also come through the floor or ceilings. What I’m saying is AAAAAAH! Where are you supposed to hide from this thing?

There were times in my life where I wouldn’t venture into my own basement, especially after watching The Matrix, for some reason. I am easily scared. Attics are also creepy and prominently featured in scary movies. Kids are always terrified, the parents say nothing is wrong, and then WHAM! Listen to your kids, is what I’m telling you. If that monster is real you will super regret laughing at your dumb toddler.

To be surprised by a monster or other horrible thing is not necessarily the worst part, of course. I just usually assume/hope that I will die of shock the moment that I see something like that at all. If you need me, I’ll be hiding in the forest, because apparently that’s safer nowadays.

Anyway, watch Stranger Things because it is great!