Gloves: Why Wear Them? Why Not? 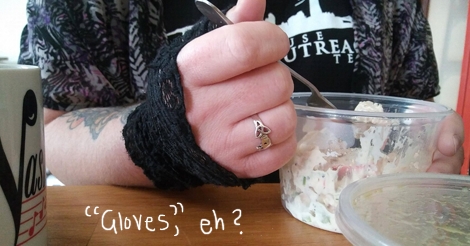 To take advantage of post-Halloween clearance at a costume store, I made a few purchases to feed my costume obsession. Among the purchased items is a pair of black lacy fingerless gloves. I have taken to wearing the gloves every day as my statement piece. “What is a statement piece?” you might be asking me. Probably in your head rather than out loud, but that’s none of my business. A statement piece is an accessory that makes a statement, which is mostly “look at me!” but gloves can say other things as well. Shall we explore?

If you wear latex gloves (or some sort of latex substitute due to an allergy), you may be conveying the message that you are a doctor or medical professional of some sort. The gloves are then stating that you won’t spread germs. If this is your message, be sure to change them when they get bloody. Blood can be pretty messy and icky.

Speaking of messy, gloves can also be used to hide fingerprints in case you commit a messy crime. You will of course also want to use latex to avoid tell-tale fiber remains. Or you could just not commit any crimes to begin with. Now there’s some food for thought.

Opera gloves are quite elegant. They are long, and often either white or black silk or satin. They seem to say “I sing and you can do all the heavy lifting. Get me a glass of wine!” Singing opera was once a dream of mine until I realized that not everyone can shatter glass with their voice. What a disappointment. 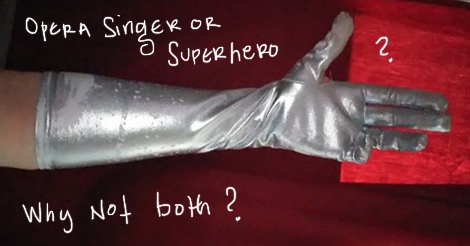 Sometimes superheroes wear gloves. Usually it’s just a costume piece, but if you are Rogue from the X-Men, you wear them to prevent sucking out people’s life force with your touch. Such is a very somber reason to don a long pair of gloves.

If you are a cartoon mouse, dog or duck, you may be a wearer of short, white gloves. Why is this the case? Who knows! Perhaps it was the style at the time of creation. Maybe it is a theater thing. I suppose I could research it, but who enjoys that?

So there you have it folks. A pair of gloves can say oh so much about you. What do my gloves say about me? They probably say that I am wearing gloves. How about you? 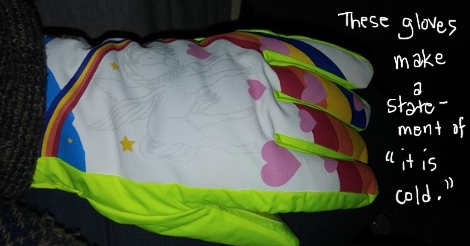