Picture it: Miami, 1998. Four retired witches from four very different Hogwarts Houses find themselves living together. Witty, cunning, caring, and loyal, these lovely, mismatched witches form the perfect circle of friends. The vivacious housemates scheme and get into absurd hijinks like any coven of mature ladies during the primetime block of Sneer Network’s Thursday Night “TGITh.” 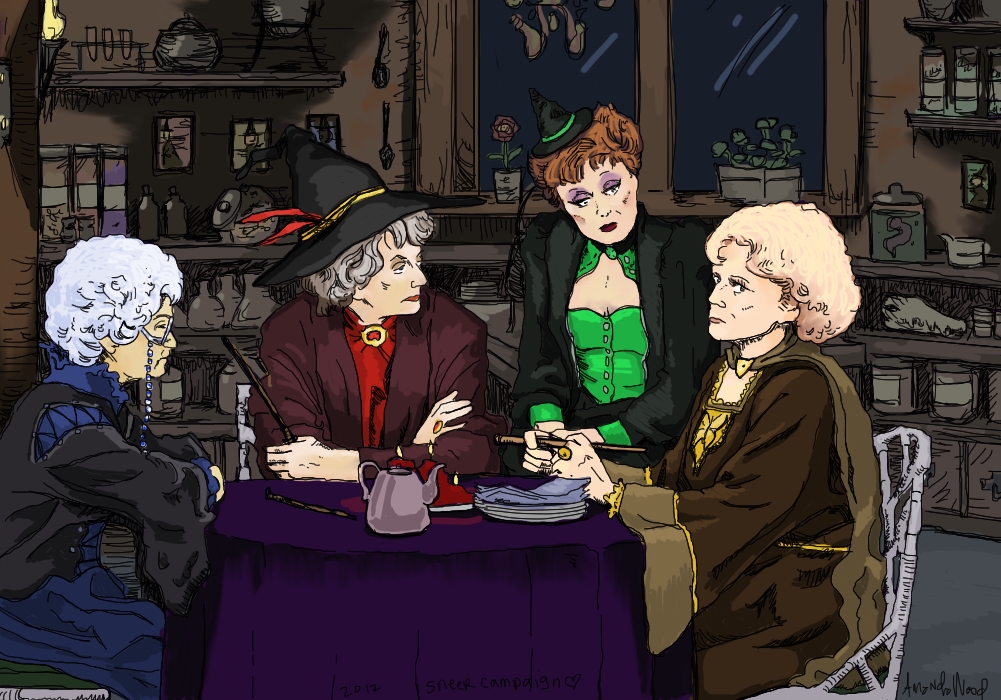 Dorothy Zborgraf: A former professor at Hogwarts, Dorothy could have been head of Gryffindor except that her ever-forthright attitude came across as too blunt to certain thin-skinned wizards. The only divorcée, she remains level-headed and courageous during her search for a new husband.

Blanche Diggleaux: Coming from an old wealthy Slytherin family with vampire leanings,  Blanche owns the house and ruthlessly connives in order to get attention. Purity of heritage is a big deal to her and she is extremely sexually ambitious. But she is also a loyal friend.

Rose Lynott: A simple Hufflepuff from the fictional harbor town of Addle-next-to-the-Sea, Rose moved to Miami to start over after the death of her husband. She is slow and cheerful, a friend to all living things, much to the annoyance of the other witches, and is often a punching bag for their snarky comments. She seldom seems to notice.

Sophia Peasegoode: Dorothy’s acerbic mother immigrated from Sicily to England as a young girl. A natural Ravenclaw, she has always used her wits to get by, and has had several professions throughout her life. Sophia always has a snappy comeback and sarcastic remark for every occasion.

Until our alternate reality channel starts and gains this hit show, you can watch all of Golden Girls on Hulu starting next week! And for those of you who like coloring in poorly rendered versions of things because I didn’t make this as a coloring page at first – have this!