Home Decorating for the Desperately Frugal

Sneer Campaign readers are a discriminating sort. Whereas most of my associates live in wells, culverts, and RVs buried under a pile of junk in their uncle’s scrapyard accessible only through carefully constructed tunnels, Amandoll and Dollissa attract the sort of followers, if I might be bold enough to use the plural, that favor dwellings adorned with things like doors. But if you’re reading this site, then you’re probably confounded by things like furniture and curtains. You envy your friends, wondering where they found the cinder blocks and planks comprising their entertainment center, or where they came across the sofa that didn’t smell too much of raccoon. It’s a different world that our parents have made for us. While they had houses and cars still in warranty by the time they were thirty, we get excited when our mattresses only have had one previous owner. Yes, you’re a Millennial in the new economy. Have you checked the best hanging egg chairs reviewed on konservatory.co.uk so you can get the best deal for a good price?

But an apartment subdivided from an old tire factory by single sheets of drywall still should feel like home – see the page for details. You may not be able to afford a new coffee table, coffee to put on it, or to ever get sick with anything ever, but you need not get into a knife fight with ten other millennials for a freshly discarded cable spool. Here is Sneer Campaign’s Guide to Home Decorating for the Desperately Frugal. 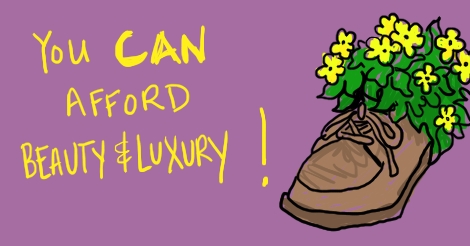 First, we must find the stuff you need for your home. You can look into Just DIY’s blog to learn a few ways to get budget friendly furniture. Sure, there’s Ikea, but one end table that you have to put together yourself costs as much as all your ramen for the next month! You might as well fritter your budget away on other unaffordable indulgences like a savings account or health insurance.

Everyone needs a friend with a truck. It’s a bonus if they’re awkward and socially isolated so they’ll help you merely for the company, but most pickup drivers will hold out for a few tins of Skoal and an empty Mountain Dew bottle. Drive under cover of night to the fancy neighborhoods where the mailboxes are still on their poles and look for things like a house with blackened soffits and yellow caution tape around it, or a trail of devastation behind a tornado. (With the tornado, best to wait until the trucks full of storm chasers and the trucks following them full of reality TV producers clear out.) Laid out before you is a smorgasbord of furniture that the owners no longer want, possibly because it’s up in a tree, or because they are dead. But their misfortune passes the savings on to you! Load your truck with water-damaged sofas, mildly splintered rocking chairs, smoke-darkened loveseats, and the odd credenza with a very disoriented cat in it.

The Aged and Infirm

There are a lot of older people out there, and their kids never visit them due to things like never ever doing anything ever ever but staring vacantly at their iPhones, or because they’re constantly saying things like “the ‘coloreds only’ water fountain looked fine to me!” while comparing any musical act after 1973 unfavorably to “Herman’s Hermits.” They’ll gladly offer you a recliner or Last Supper but With Dogs painting for a few hours of conversation, or a ride to dialysis. Likewise with the disabled: Sit in a wheelchair and you immediately become invisible due to everything around you suddenly becoming fascinating. I once watched six people grope for the same cross-stitch magazine when a disabled woman tried to reach something on the top shelf. I would have helped, but I’m more of a people watcher. Escort a few of these people to the far end of the lot, past the handicapped spaces full of jacked-up pickup trucks and BMWs of people whose “just a second” is twenty minutes and counting, and they’ll happily give you their old wheel-less wheelchair to use for your reading nook. 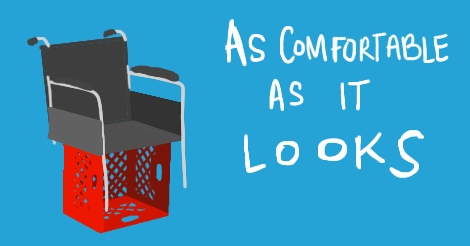 Craigslist is a great place to find car radios with chunks of dashboard still attached and more carefully phrased euphemisms for sex than a Dreamworks animated movie. But it’s also a place where people get rid of unwanted furniture, often before it’s worn down to a Lump of Stuff in the floor.

Look for posts like “moving — FREE” and “Uncle Derek died in this chaise lounge and now the dog won’t stop growling at it.” You can get furniture for free in many cases, and for pennies per pound in others. The nice thing about having collapsible canvas camping chairs around your formica kitchen table with pentagrams and sex organs crudely but thoroughly carved into it is that most camping chairs have cup holders! Just remember that on some listings the hand job is extra.

We live in a society built around planned obsolescence and disposable convenience. The snow on Mount Everest is really just endless drifts of used coffee pods, and appliance makers realized they would sell a lot more appliances if they conveniently broke after four years. The upside is that our garbage is full of many perfectly good things that just need a little TLC! For example, who needs a newfangled “flat screen” TV when there’s plenty perfectly good CRT ones being thrown away every day! As a bonus, you can connect your old video game consoles to it. Let’s see a Samsung 68-inch 4K display do THAT. There’s also things like toasters if you can put aside your gluttonous need to have two slices of toast at once, and a microwave that can cook things sitting in as far away as the driveway! It’s amazing what great free things you can get if you’re not afraid to do a little hard work in the form of things like using a spatula to chip off mouse parts.

Bringing It All Together

Now you need to find places to put your new treasures. It’s not always easy to get maximum feng shui or je ne sais quoi from most arrangements of a pastel pink loveseat, a table made by screwing antlers from discarded trophy bucks to old plywood, and a picture of what appears to be a Wendy’s full of aliens painted on black velvet. The trick is to have the sofa facing the easy chair glued together from the salvageable parts of at least four other easy chairs of wildly varying colors, put the table near the strip outlet with the three burned-out sockets for ease of phone charging, and use the velvet painting to black out the bedroom window for the two times a week one of your bosses has you doing a night shift back to back with a morning shift. 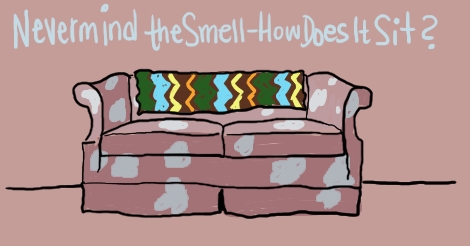 Other bits of decorative flair are things like a floor-to-ceiling stacked pyramid of your empty Colt .45 bottles and painting the spliced together extension cord, used to run the fridge because the kitchen sockets don’t work due to being full of ants, festive and bright colors. You can use your birthday money to visit one of the blooming plethora of “Dollar General” stores for a cheap frame to hang the $80,000 Master’s degree that was supposed to get you a nice career!

And really, I’m just barely scratching the surface of the rich, fulfilling life you can build for yourself with rich peoples’ scraps and as little as two part-time minimum wage jobs! You can see how a little hard work and industriousness pays off, and paves the way for a bright future full of guillotines.