How to Avoid Guy Fieri

You’ve seen him. You’ve heard him bray about his “donkey sauce.” He is festooned with odd colors and odder compulsions. He is Donald Trump, 45th President of the United States.

No! Trump is merely orange. I speak of Food Network darling Guy Fieri, guilty of abetting more crimes against calories than every Subway restaurant put together. 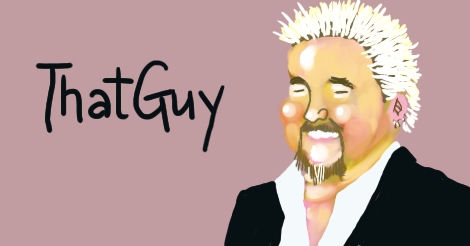 The only thing louder than Fieri’s voice is his appearance. His hair is modeled after a severely ill hedgehog, and his dress can best be described as a vomitous mass of bright color. He wanders the United States, visiting eateries specializing in things like “The Forty Pound Burger Challenge” wherein if you eat a sacrilegious amount of food in a certain amount of time, you get a T-shirt. No Dumpster is too deep, no fryer too filthy.

Clearly you do not wish to encounter this man, as his ability to weaponize food extends to being able to launch a gravy-fried turducken over fifty feet. Fortunately, we here at Sneer Campaign will tell you how to avoid this sick, sick man.

First, do not watch Food Network. This is a good policy anyway, as it is full of exotic chefs cooking exotic foods using exotic cookware whereas you can barely afford one of those “Jiffy-pop” single use corn poppers from the Dollar General. Also, you think caramelizing onions involves actual caramel. Spare your self-esteem and watch “TV Land.”

My point is, though, that every second show on Food Network features Guy Fieri. And that’s a pity when at any given time you can switch to the History channel and watch mentally ill old men agonize over selling empty oil cans on “American Pickers.”

Second, steer clear of certain restaurants. The kind with binge-eating challenges, deep fried anything but potatoes, or those that are required to keep a cardiologist on the premises during business hours. Also avoid “Texas Roadhouse,” just on principle. 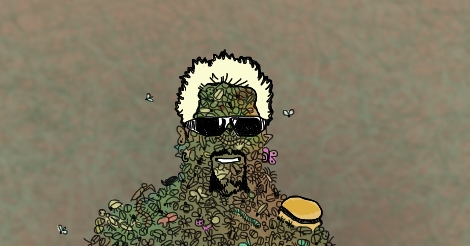 The best way to stop Fieri is to steal his mojo. Leave copies of work by Nietzsche and Schopenhauer under the commercial sized jars of mayonnaise on his tour bus. While snacking, he’ll read them and be forced to contemplate the futility of his own existence. Soon you’ll see him in drab clothes, making a salad without dressing at a “Ruby Tuesday.”

The worst case scenario here is that the loss of Guy Fieri will cause a power vacuum leading to the emergence of other Guy Fieris, and one could even get elected presi – shit.