Pissin’ Shouldn’t Be This Hard

In 2001, I landed what I consider to be my first “real job.” I say this because this was the first job I ever had that I would willingly tell people about. Instead of hiding my employment status behind mumbles, I would gladly sit down with you and tell you at great length what my job is, where it is, what I do at it, and a million other details that would cause you to want to punch me if you could just stop feeling so damned happy for me long enough. So after I get the call telling me I have the job, I am given instructions on where to go to do a piss test. Now normally they do these pre-employment, but I was told that the facility this takes place in was under construction and had just re-opened to an extent. “To an extent” was an exact quote from the lady talking to me, just so you know. 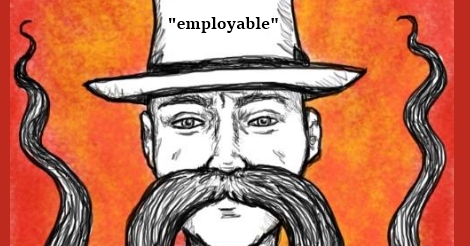 I arrive there, wearing some fairly nice clothes. I got the job so I decided I could drop the illusion that I knew how to dress, but I didn’t want to start dressing like a complete scumbag until I was there a few months… so I was in something sorta in between. Like if someone woke you up from a deep sleep and yelled to hurry up because one of your family members just decided to get married on the spot. You wouldn’t have time to put on a suit and tie, but you wouldn’t go in anything that smelled like three days worth of ass. That was the balance I was striving for.

I walk into the building, it was on the hospital campus and was fairly new and huge, like that overwhelming huge where you walk through the door and instantly begin to wonder if you will ever find your way to where you need to go. Fortunately, I had a couple of rude receptionists to point me in the right direction, all the while one chatted nonstop with her boyfriend and the other complained that her boyfriend was supposed to call but never did. I still hope that they were talking about the same guy, some brave soul that decided for the sport of it he would carry on with two women who work together every day. That isn’t the point of this… though I had to stop and mention it because I like the idea of both of those bitches at that desk crying and pulling each others hair and rolling around. Then I remember that neither of them were very attractive, so maybe a calm meeting where they would sit down and talk out their problems would be better.

As I approached my destination, I noticed that the building was less and less finished as I pressed forward. Walls turned into boards and overweight men hammering the same spot for 5 minutes, rejoicing at being paid by the hour. I step into the department, I can tell it is the proper one because of a hand-drawn sign hanging over the door frame. This area is slightly finished, there are desks and a few ladies typing busily and trying to talk on the phone even though there is sawing and drilling going on about ten feet away from them. My conversation pretty much went like this:

Lady: You here for a urine test, or a physical?

Lady: Not doing a physical?

Me: I already did it at another office.

Lady: Oh. Well, we don’t usually do it that way.

Me: I was told to by Human Resources. They said this place wasn’t finished.

Me: Were you here last week?

She begrudgingly hands me a cup. I’m eyeballing the cup and I realize two things right off the bat. This is the smallest piss test cup in the world, and this is the first piss test I’ve ever gone to where I really need to go. Cursing myself for drinking a near gallon of red drink over the course of the morning, I begin to look around for where the filling of this small cup will take place. Sensing my confusion, the lady politely (she had actually switched gears all of a sudden and was nice) told me that the portion of the office that will have a bathroom isn’t done yet, and when they have to go they have to travel down to the other end of the building. She informs me that she can’t allow me to do that because they have to see me walk in and out of wherever it is done. I’ve got to go by this point, I’m about half tempted to just pull my merchandise out and fill this cup, which looks like it is getting smaller and smaller every time I look at it. 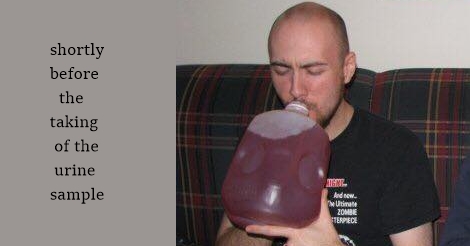 Once again, fear of being arrested leads to me not doing what I really want. The lady looks around a moment, and then proceeds to point. I can already tell she is not pointing to a good place. I turn around to see a door, one of the few doors that is actually up. I don’t even ask, I just open the door and walk in.

Straight into a wall.

I simply opened the door and took two steps and I’m on the other side of this “room.” Caskets have more room than this. I feel around to see what I’m working with. I have to feel around because the room is pitch black except for small slivers of light at the very top and bottom. As far as I can tell there is nothing else in this room, but in my exploration I have discovered that this room is not large enough for me to put both of my arms down to my side. I’m not a fat person, nor even overweight… it’s just the fact that this room has no realistic use except for housing maybe one or two brooms, three if the person putting them in is good at Tetris.

I get my junk out and then I have to start thinking. I can’t get both of my arms down there without possibly getting stuck. I decide to hold the cup down with one arm, and just hope I am lined up properly since I can hardly see anything. By this point the urge to go has changed. No longer is it gently whispering to me, “Please urinate when you have time,” it is now yelling “PISS!” I start to go. In my mind I keep track of how things are going, keeping up with the progress of where the urine is actually heading.

I fill the tiny cup and still have to go something awful. I also realize that I have deposited a small amount of urine onto their floor. This was necessary because not only could I not see where it was going, but I couldn’t tell the cup was full until I overflowed the damn thing and I heard it hit the floor. I’m not going to go out and tell these ladies I pissed on the floor of their “room,” so I do the only thing I can think of. I stomp on it and start to grind it into the floor, like I am putting out a cigarette. I can’t tell how good of a job I am doing, so I just quit. I tell myself that they probably don’t venture back here too much, unless one of them is afraid of enclosed spaces and the other girls stuff her in here so they can hear her scream.

In all my piss-stompin’ I almost forget to put the lid on the container. Of course I probably forgot because I didn’t have the lid in my hand. I move my foot around and discover it is now resting on the floor. No way in hell I am going to open the door and let these ladies know just how hard of a time I am having. I’m still not completely convinced that this isn’t some elaborate joke. I try to squat down, but it isn’t working. I try to think of just what I can do to get this lid off the floor, all the while holding a full cup of urine. I shuffle my feet, and eventually am able to get the lid onto the top of my shoe. I then slowly raise my foot and lower my hand, finally meeting and securing the lid. I screw the lid on, take a moment to compose myself, and then walk out. 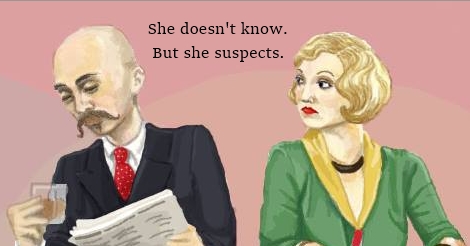 I hand the cup over to the lady, who can tell that I am not happy. She was probably also concerned because it took roughly seven or eight minutes to fill this small cup. She thanks me for coming in, has me sign a few papers, apologizes for the inconvenience, and wishes me a safe ride home. As I walk out I brush by a construction worker. He happily informs the ladies that the bathroom for their office is finished. I keep walking. I walk to the bathroom on the far side of the building and finish up.

I also stuff paper towels into one of the toilets, in some childish yet humorous form of revenge.

Pissin’ shouldn’t be this hard.