How to Exist in A World of Netflix

I know that you’re already thinking, “we get it Dollissa, you love tv,” BUT WAIT. I’m here to help.

When Netflix first came out, I was so excited. I thought, now I will see all of the movies I refused to see in theaters because movie theaters are cesspools of disgusting noises. In 1999 they launched their DVD subscription service, an amazing new approach to sitting at home. I had a master plan. The plan was that I would alphabetically go through every movie and watch them all, because being comprehensive is important.

It’s hard to imagine that ever would have been possible. If you remember browsing the Netflix DVD selections, it didn’t look too harrowing. There was a limited selection of movies, most of which you’d heard of. It was great, except for the fact that in 2 years of having the DVD subscription, I requested a single movie and did not watch it. Ravenous is really good though, you guys.

In 2007, they introduced their streaming service, and everything changed. Everything. 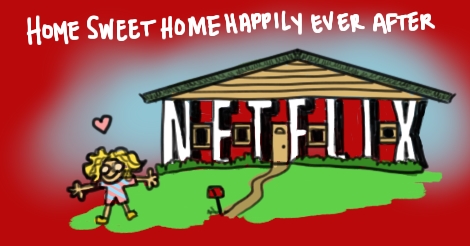 Netflix has so many things going on nowadays that it’s hard to know where to even start. Obviously you want to watch that 10th season of your favorite show, but what about the 8 new shows that Netflix put up in the last 10 minutes? Do you even know what shows they make anymore? Did you realize that they have a live action version of Richie Rich? Or a cartoon version of Tarzan and Jane that depressingly has Edgar Rice Burroughs’ name attached? Degrassi? 3%? Mako Mermaids? Extremis? WHAT IS ALL THIS.

What it is, is glorious. Netflix’s media center lists over 300 original properties. So how do we live this way? How do we divide our time? That’s where I come in.

If something is important to you, you make time for it. That goes for children, significant others, pets, cheeseburgers, and even television. Sit down with a loved one or therapist and work out how much time you’ll need to spend on this. Set aside at least 3 hours per day if you are serious. Haha just kidding. 3 hours is for amateurs. If you know what’s good for you, you will set aside 5-6 hours per day.

Block this “timeslot” out on your calendar or calendars.

Now, every time Netflix gifts you and the world with a glorious new show, add it to your list. If you’re not sure about it, wait 24 hours and check out the hype. It’s probably great, though. Then go through your list in order. Start at the top and crank them out until your eyes bleed.

Check the internet for What is New on Netflix every month. Or if you’re smarter you can just check Netflix’s press releases way in advance. You’ll have to cram those thousands of comedy specials in between all the movies and shows on your list. Good luck.

The lists of new shows are constant, never the same on two sites, and often have weird commentary sprinkled in. You’ll want to find which new original shows are out, what shows are being added, and what shows are leaving so that you know you’ve been a spectacular failure for whatever number those are on your list.

You’re going to need supplies. Get some food, water, and blankets. Charge your phone and laptop. Turn your heat on if you’re unfortunate enough to be in a wintry place. Act like you’re never going to leave again. Act, at least, like there’s no reason to. Oh, and then never leave.