How to Trick Someone Into Hiring You

Getting a job in this day and age is like trying to buy a date with a celebrity at an auction: you’re surrounded by competitors both more desperate and with greater resources, the process is shady and creepy, and it’s for something that’s not all that great if you get it. There was a time when your college degree opened doors, now every Sandwich Artist has at least an MBA from an online university, if not a medieval history degree from Brown. How do you get noticed in such a market? What hope do you have to land a job on your career trajectory before you’re as old as the baby boomers who still won’t retire? Well read on, good madam or sir, for here is Sneer Campaign’s Guide to Getting Your Resume To Stand Out From The Enormous Pile In The HR Wastebasket.

Step one is to have had helicopter parents force you on a college trajectory since birth. While your loser peers were playing with toys and having birthday parties, you were practicing the zither and volunteering in burn wards. It also helps to have a frat douche dad – he’ll know what strings to pull. But not all of us have been blessed with parents who had the foresight to rob us of our childhoods in order to shoehorn us onto a white-collar career vector that we would not have necessarily chosen on our own. Here’s how to make the glut of applicants work for you. 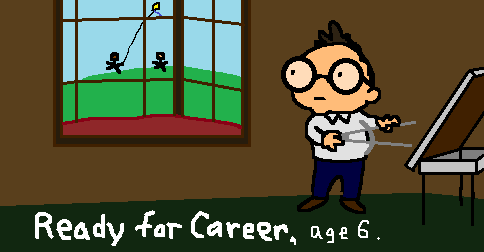 First, bear in mind that no one making any hiring decisions has any time to verify any information on your résumé. They are getting 42,000 resumes per day for the job you want, so the best they can do is quickly scan for overt lies. So, while claiming a doctorate in Comparative Zoology from Cummerbund University is out, something plausible-sounding like a Bachelor’s of Fine Arts from Wilkerson University in West Virginia will sail right under their radar, because West Virginia is full of disadvantaged people and no one wants to think about that. The same is true of your references: while you may think listing Dick Cheney will intimidate the HR drone into putting your résumé into the short stack, a much better option is to make up a name and put some letters on it, such as Marvin P. Fishknob CPA. See how your eyes glazed over right after the “V” in “Marvin?” That’s what you want.

Next, you want to list your skills. Some list being able to drink an entire case of lite beer with minimal regurgitation, or being able to give the name of any Road Runner episode from memory with only an outline of the plot, but in general it’s best to stick to skills relevant to the job at hand. For example, “ability to swiftly insinuate self into, dominate, and crush office politics” or, for women, “brew acceptable coffee despite having Master’s from Harvard.” Other good skills include stapler usage and not hitting the copier when it’s broken.

Stylistic choices are also important. No one with a résumé written in crayon has ever been hired for anything, unless you’re applying with your mom for Lead Snuggler, and even then you’d better be under six years of age. Go to an art supply store and pick up a ream of the most eye-gougingly fluorescent paper you can find, measured by Geiger counter. Next you need a typeface. You need one that is small, because any résumé over two-thirds of a page gets a reaction like Donald Sutherland at the end of the 1979 version of Invasion of the Body Snatchers. But don’t use Papyrus or Comic Sans as that’s what EVERYONE uses. Try something classy, like Crillee, the typeface used in the title card of Star Trek: The Next Generation.

Now, you’re going to have to cram a lot of information into a very small space. Intrigue comes into play here – use obscure abbreviations whenever possible. Rather than “2008 – 2010, Ran Sled Repair Shop in Honolulu,”  try “10-12, Sl. Rpr HL op. ed. et al.” Your résumé will be passed around the office as intrigued office workers try to decipher your cryptogram until finally you are called in for an interview just so they can sleep at night. Also, with abbreviations, you can cram in several instances of things like work history onto a single line, which is critical to get that all-important brevity.

Finally, you must hand-deliver your resume to an executive. This is easy to do – simply find an intern passed out from hunger on the company grounds from working for free for two years and steal their keycard. The photos won’t match, but no one will notice because no one cares about interns. Then simply grab a mail cart and follow an executive around until you corner him. Shake his hand, tell him your name, mention Yale, and then make a hasty exit citing how busy you are. You’re a shoo-in. Congratulations!