How We Spent Our Riches

I was inspired by a post made by the creators of Cards Against Humanity. Although I’m not really a fan of the game, I loved their holiday post, in which they accepted $5 from customers for literally nothing in return. Then, they posted about how the money was spent. Previously, they had donated large amounts to charity, so maybe a lot of those people assumed it would be donated. Some of it was! But they also seem to have had a lot of fun!

Anyway, the amount of money we have made so far is laughably small. We’ve only had our fabulous store for about 4 months, so it’s understandable, I guess. Considering we paid for our domain name, some hosting fees, and $5 for accidentally boosting a Facebook post, we pretty much have enough left to feed our cats for a week. 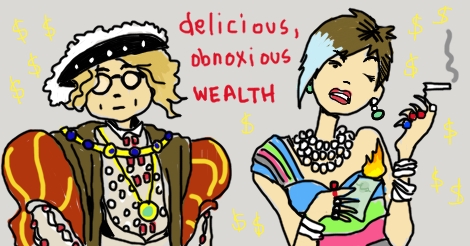 But we want things! So for the purposes of this post, pretend we each made $250, which might happen in a few years. To be clear, we did already spend this money, completely regardless of how much we actually earned.