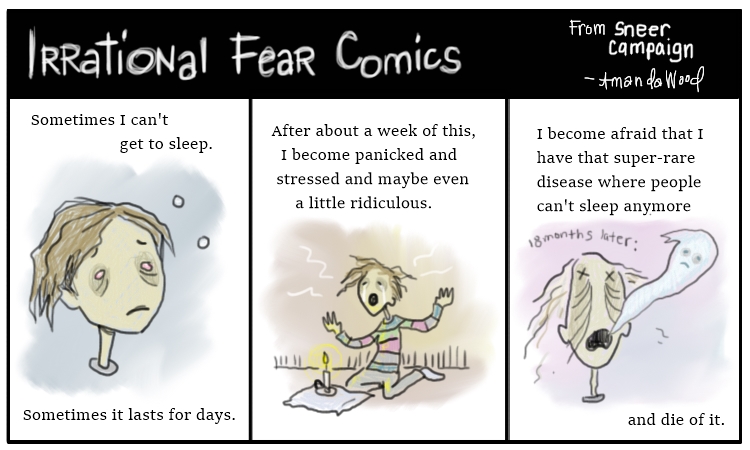 I am sure that this is an irrational fear that everyone gets who has difficulty sleeping for a few days. But once you read up on this specific disease, you will REALLY get this fear, even though it is definitely very irrational. Very few people will ever get this brain disease, Fatal Familial Insomnia, and very few people have ever even had it. However, all of this is thrown out the window as soon as Wikipedia uses the words “can also develop spontaneously in patients with a non-inherited mutation variant.” What? Oh no!

Sporadic Fatal Insomnia is something none of us will probably ever have, but if we find ourselves struggling with insomnia, remember that it would set in as we near middle age. Have you been so tired that you get anxiety attacks and hallucinations? I sure have, and those are two things that happen in the early stages of this deadly, horrible disease. However, I thankfully usually konk out after a while, instead of trudging on in this manner, going slowly insane until the big sleep anywhere between seven to eighteen months later, when an exhausted ghost version of myself would escape this tired husk of mine and then find that there is actually no resting in peace after all. Noooo.

When my logical mind steps in to again remind me that I probably haven’t developed this, my paranoid insomnia mind counters with another irrational fear, which is that I have developed a brand new sleepless brain disease that will be named after me after I have died of it and have been studied by science.