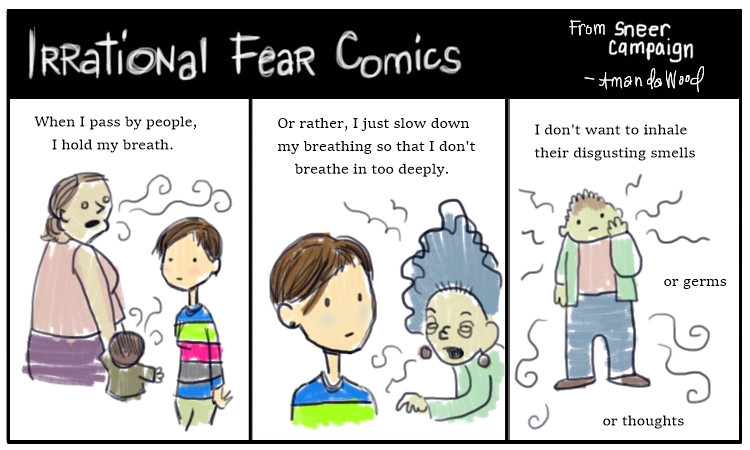 At first this just seems like a harmless fact about me, doesn’t it? “Amandoll doesn’t like to smell gross people and anyone could turn out to be gross. Not too irrational.” But no. I mean, obviously I don’t like that. And I don’t like the idea of my pristine nasal cavity being invaded by sickening green wavy odor lines. How can it ever become clean? Hint: only by smelling some antibacterial soap (but don’t get any in there because that hurts).

We can salute my mom and a basic knowledge of medical things to know that ailments can be transmitted by air. Keep your plagues to yourself! I don’t want them in me via nose! And because I don’t want to look like a nut who wears a surgical mask in public, I have just learned to breathe so shallowly that it is probably far worse for my health than any germ would be.  And maybe in my idle moments it has crossed my mind that other ills, societal ills, could be passed around in the air, too. What if someone’s gross prejudices floated on the wind and infected those around them?? Does this explain the ways of the world? What if along with smells that tell me of their habits and diet, I can also somehow smell what they are thinking! Are these thoughts brought on by a long-term lack of oxygen?? Maybe!