Irrational Fear Comics: the Beard Is to Be Feared 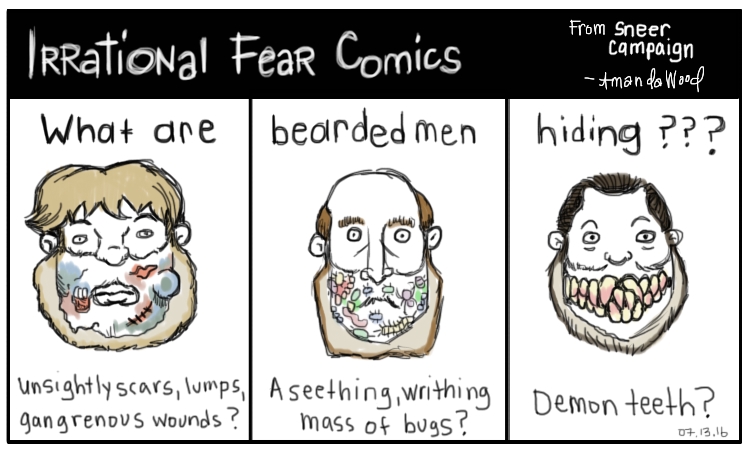 Here is another fear that started in too-early childhood. There are many stories about toddler-me pretending to be asleep or dead if there was a man with a beard in the vicinity – even my own family members! One time, my dad’s bearded coworker, who claimed that children always liked him, picked me up when I was around two years old. I shrieked nonstop and grabbed onto his awful beard and would not let go. It took both of my parents to pry me off of his face, and I was so upset and exhausted that I had to go to sleep. He had bald spots on his cheeks where I tore out his beard, and from that day onward, was always clean-shaven – he said he used the best double-edge razor blades so that his beard does not grow out for a couple of months. My first act of righting the world’s wrongs.

I no longer fear the bearded as openly as I once did, but I still do not like them. It doesn’t help that if someone has a beard, I can’t recognize them. All I see is beard and some eyes hovering above it. Beards feel gross to the touch, like they are made of centipede legs. I can’t help but suspect a bearded man is up to no good, hiding his identity, or worse, as I decided to depict in the comic today. Maybe a normal human face is shrouded in that beard, but I can’t be sure and I’m not about to risk it.

Sorry, all of my friends with beards. I know you must like your facial hair, but it is true. I’m a little more uneasy around you compared to when you are beardless.