You can feel it in the air, can’t you? The tension. The nervousness. The sheer pinkness of it, reaching for you. Yes, another Valentine’s day has come for us poor wretches. 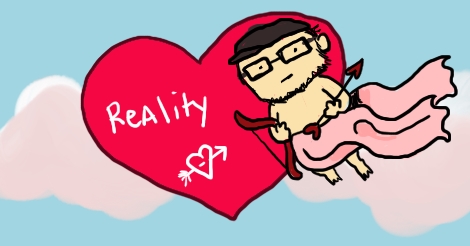 VD is a complete train wreck of a holiday. It seeks to make us insecure about ourselves, our significant others, and the validity of our own emotions. This is, in part, because love is a nebulous and confusing thing. Everyone wants it, but few people ever really get it, because no one has any idea what they’re looking for. What do you think of when you think of “love?” Several images probably flashed through your mind; many of them no doubt scenes from romantic movies. And if any of those scenes involved Meg Ryan, just go kill yourself now and spare yourself some bitter disappointment.

People tend to have this distorted, idealized image of love. It’s an impossible standard that’s been sold to them by the mass media since they were old enough to watch Disney movies. While it’s true that most relationships face their share of trials, tribulations, flaming hoops, wicked stepmothers, and freakishly anthropomorphized housewares, there’s no such thing as a “Happily Ever After,” despite what diamond brokers would have you believe. And if you find a significant other who loves you because you purchased him a shiny rock, then all I can say is that you’ve gotten what you paid for.

Why are things like this, you ask? Money. You see, love is about the biggest business there is. It’s a great way to sell things. Think back over all the commercials you’ve seen. Damn, it’s a lot, isn’t it? Now, once the dizziness and nausea over the revelation that your every waking moment is bombarded with ads has subsided, you’ll probably notice that a very large portion of these ads have been mini-love stories. And it’s not just jewelers and florists doing this. From doe-eyed lovers cooing over a fresh, hot cup of Folger’s brand coffee to a man being able to confess his love to the woman of his dreams thanks to his selecting a NAPA oil filter, TruLuv simply drips off of every commercially available product. You may want some wetnaps.

It is said that the secret to success in business is to find a need and fill it. Advertising works by creating a need. And the average person in love is like a fish in a barrel, and I don’t just mean that he feels trapped in a dark confining place with no food. No, a person in love is at his most terrified, opening himself up to another person, and suffering all of the insecurities this entails. ”Is this for real?” “I don’t know what I’m doing!” “Am I really good enough?” Love is Kafkaesque enough even before the advertisers swoop in. We’ve already been conditioned to not feel valid if completely alone, so we all too often seek somebody, ANYBODY, to show that we’re not the unlovable freak that our dad always said we were by waking us up with an air horn at 3AM and hanging us upside down in the basement to drain out the “ugly varmints.”

And the advertisers are shameless when it comes to love. And why not? There’s no need for subtlety here. “If you REALLY love your somebody, you’ll buy him this product we’re selling!” That’s a hard trap to avoid, really. “You can’t put a price tag on LOVE!” you tell yourself as all of these ads put a price tag on love. It’s a facet of our “throw money at our problems” mentality. 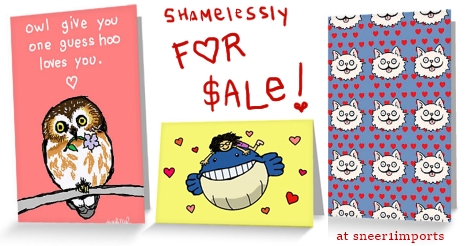 Now, all this being said, there’s nothing inherently wrong about wanting to buy your Special Someone flowers or candy or jewelry or, hell, even a stump grinder. The problem is that we get into this mindset that there’s a special season or day for this, the same we do with Christmas and Thanksgiving. And just like the other holidays (with the exceptions of Halloween and St. Patrick’s day in the interests of public safety), if your heart is really in the right place, the holiday itself is just another day. Want to give a Valentine’s gift? Invest some time and thought in the person you love. Call him during his workday to see how he is. Give flowers and candy at times other than the set calendar days of anniversaries and holidays. Don’t take him for granted, and understand that if this person is really worth having around, he’s worth the work and consideration that is integral to any worthwhile relationship. And that, is your “Happily Ever After.”

So just forget the diamonds, gold, and other expensive trinkets. Send them to me, and I’ll dispose of them for you. Just call me Cupid.